This is just more proof that Chris Brown wants his old girlfriend Rihanna back.

The “Loyal” singer sneaked into day two of Rihanna and Eminem’s Monster Tour at the Rose Bowl stadium in Pasadena, California on Friday night. But fans noticed him and word spread online.

Chris Brown was spotted backstage the concert and even came in close proximity to Rihanna. But sources close to the Bajan pop star told Urban Islandz that they didn’t exchange any words.

“Chris came backstage and he was very loud because he obviously wanted to be noticed, but Rihanna didn’t even looked at him, she was just about her business performing with Eminem for their fans and taking photos with fans,” the source told us.

The source also told us that Chris Brown spent most of his time with a few other celebrities at the event including rapper Tyga.

A fan uploaded the below photo on Twitter showing Chris Brown getting very close to someone claiming to be Rihanna at the concert. 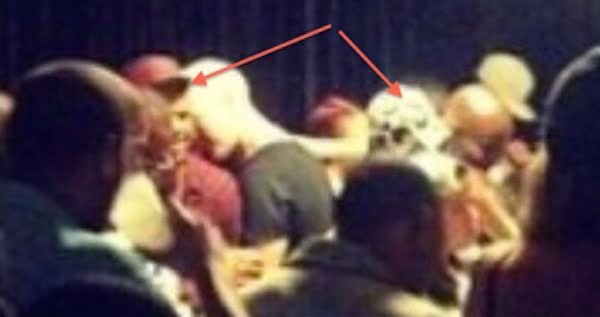 Chris Brown also posted a painting he did of The Monster Tour on his Instagram page.

But Breezy later removed the image from his Instagram page.

Chris Brown has been begging to get back Rihanna since his release from jail and has turn up his efforts since dumping his on-again off-again girlfriend Karrueche Tran.

“He has been texting her nonstop and blowing up her phone begging to meet with her but surprising this time she is holding her ground and told him no,” a source told Urban Islandz.