Dua Lipa breaks silence and condemned her collaborator DaBaby over his anti-gay remarks.

A video featuring DaBaby on stage at the Rolling Loud Miami concert on Sunday is making rounds online, during which the rapper is heard making ignorant comments about HIV/AIDS and hating on gay men.

In the clip, DaBaby is heard instructing the crowd, “If you didn’t show up with HIV, AIDS, any of them deadly sexually-transmitted disease that’ll make you die in two, three weeks, put a cell phone lighter up.” He continues the odd rant, adding, “Fellas, if you ain’t s*ckin’ d*ck in the parking lot, put your cell phone lights up.”

The clip doesn’t provide much context, but internet users far and wide have since condemned Baby for the remarks, accusing him of homophobia and ignorance surrounding HIV and AIDS. Having previously collaborated with Baby on “Levitating”, Dua Lipa took to Instagram to respond to the video.

“I’m surprised and horrified at DaBaby’s comments,” she wrote. “I really don’t recognize this as the person I worked with. I know my fans know where my heart lies and that I stand 100% with the LGBTQ community. We need to come together to fight the stigma and ignorance around HIV/AIDS.” 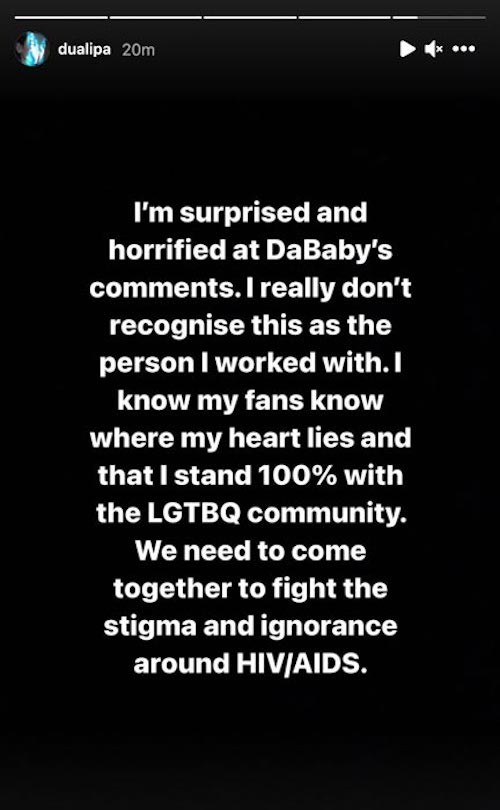 Robert Stafford, gospel musician and father to openly gay rapper Lil Nas X, also responded to the controversial remarks, posting a picture of his son and DaBaby following their collaboration on “Panini (Remix)”, and captioning the post, “Bruh sit down you had your time”.

Nas X has not spoken out about the comments directly, although he did post a simple and likely sarcastic “lol” to his Twitter after the Baby video went viral. DaBaby, however, chose not to apologize, but instead stood by his remarks and insisted that they made sense to his fans in the context of his show. “This sh*t don’t concern y’all at all,” he said. “Don’t be disturbin’ my motherf*ckin gay fans. You ain’t supposed to get it.”