Lil Wayne and Denise Bidot have officially ended their relationship.

It seems Weezy F Baby is no longer in a relationship with his lovely Puerto Rican/Kuwaiti hottie Denise Bidot. This comes after fans discovered that the two are no longer following each other on social media, which is the ultimate sign that things have gone sideways in a relationship.

Lil Wayne and Denise Bidot have been inseparable since they first started dating earlier this year, which ironically was shortly after Wayne called off his engagement to Australian plus-size model La’Tecia Thomas. Fans got to see a different side of Wayne over the last couple of months which included numerous photos of the two kissing, among other forms of PDA. Wayne referred to Bidot as his “ALL,” meanwhile the model gushed over her superstar rapper for his birthday.

“Happy Birthday to the man who managed to steal my heart during a pandemic. These past 5 months have been filled with more love, passion and laughter than i ever thought possible. You’re my best friend, my lover, and way more than a dream come true. Here’s to celebrating you today and every day baby!! I LOVE YOU,” she wrote.

The love seemingly continued through to the new year since they both rang in 2021 together. “Happy New Year!! Hope everyone finds themselves surrounded by love and good vibes not just today, but all of 2021. Besitos,” she captioned the pic of her and Wayne on New Year’s Eve.

That picture is no longer available on her profile. She has instead shared a post to her IG Story, which could be an indication of just how she’s feeling right now.

“Pretty disappointing when you defend someone throughout everything and they turn out being just as sh**ty as everyone said they were,” reads the words from the post. As for Wayne, he used his IG Story to share a snippet of one of his classic tracks, “Hoes” feat, Mannie Fresh. 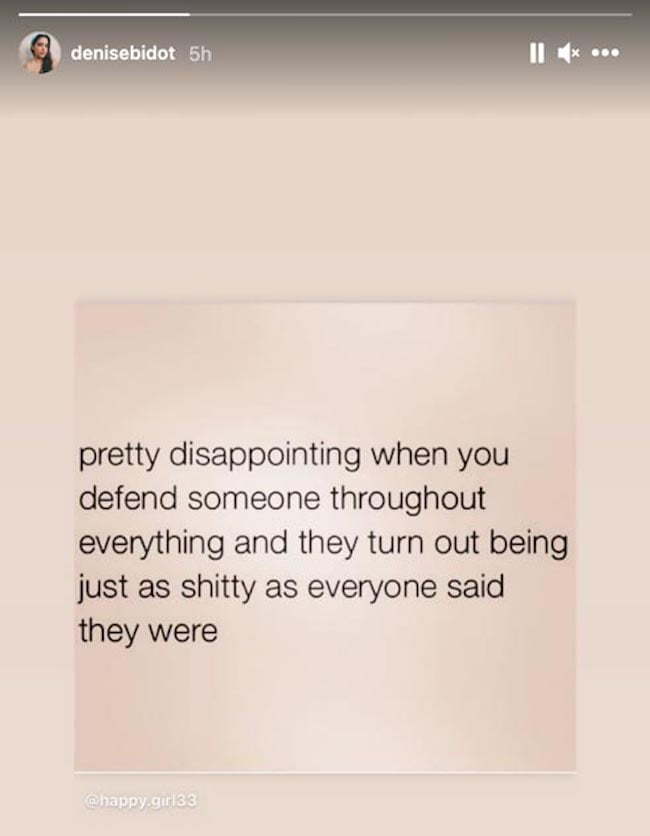 This is not the first time Wayne and Bidot have ended things. The two lovebirds seemingly ended their relationship in November after Lil Wayne publicly supported Donald Trump in the 2020 Presidential campaign. Bidot unfollowed Wayne and even deactivated her IG account. Thankfully, they were able to rekindle their love soon after.

We will keep a close eye on their social media pages to see if they are able to work things out.