Vybz Kartel’s latest album, Of Dons & Divas, has surged to the top of the iTunes Reggae Chart following his recent Appeal Court ruling.

Vybz Kartel is seeing a surge in his music streaming following a crucial ruling in his appeal case paving the way for him to take his murder case to UK’s Privy Council. There is a saying that good music is bound to outlive us all, and by the looks of it, Kartel, who is one of the biggest hitmakers in dancehall, has risen to the occasion once again with his album, Of Dons & Divas.

The Worl’Boss dropped off the full-length album on June 26, and since then, he has been steadily promoting the various tracks with new music videos and hot new remixes. It seems that all the work has finally paid off, with Of Dons & Divas locking the number 1 spot on iTunes Top 100 Reggae Albums List once again. The 18 track project pulled in ahead of Legend: The Best of Bob Marley and the Wailers (Remastered), and Higher Place by Skip Marley, which holds the number 3 spot. Legend (Deluxe Edition) by Bob Marley & The Wailers occupies the number 4 spot and World on Fire by Stick Figure round out the top 5, on Saturday, October 3, 2020. 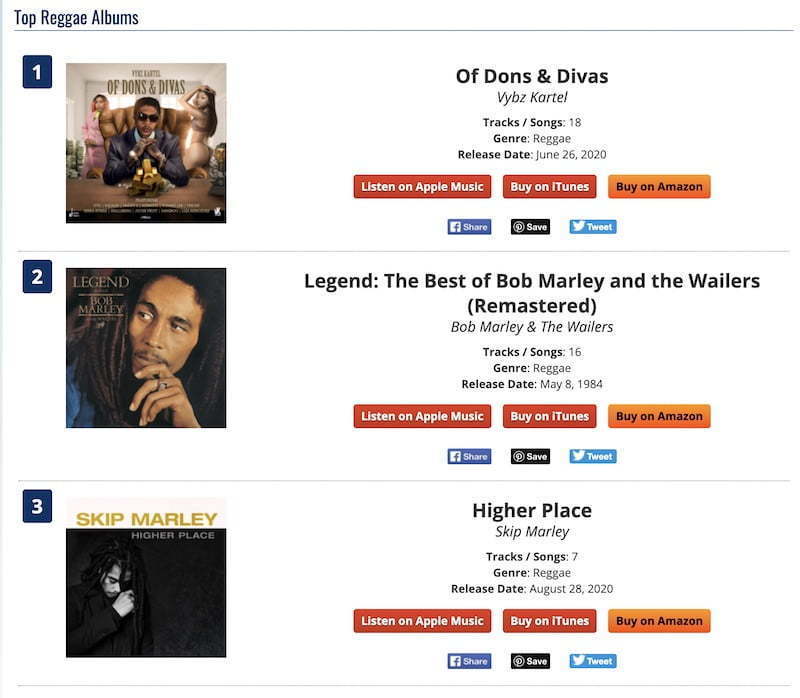 Of Don’s & Divas, the album Vybz Kartel touted as his Grammy effort, debuted at number 06 on the Billboard Reggae Charts in early July. Meanwhile, Buju Banton’s Upside Down 2020, which was released on the same day, debuted at number 02. The album was soon not noticeable on the Billboard charts, however, had developed a following on the iTunes platform shortly after it’s release. The love, especially of its leading track “Cute Rider,” saw the project landing in the number 1 position on the Apple Chart at the end of June.

While speaking about the album earlier in the year, Vybz Kartel said, “The title of the album “Of Dons and Divas” is representative of the all-star cast that the album has, including myself; this album has more features than an iPhone 20.” The album included the likes of Sikka Rymes, Lisa Hyper, Teejay, Skillibeng, Daddy1, Slimatic, American rapper Jucee Froot, as well as his sons Likke Vybz and Likkle Addi.

What track from the album are you still vibing to?