Amid Vybz Kartel’s murder conviction being denied, the family of Clive Williams, the man who is said to have been murdered, released a public statement.

Tensions are running at an all-time high amongst the Gaza nation as fans are reeling from recent events involving Vybz Kartel, aka Worlboss. Last week he stunned everyone by going live on super-producer Rvssian’s Instagram Live, which sparked the searching of his jail cell to recover the contraband. Fans were excited to have heard their beloved artiste even though he did not physically show his face on the live session. Then in a twist of events, his lawyer posted on social media that his two-year appeal process was coming to a close as judges had finally come to a decision.

Although the appeal was denied, his lawyer was given a week to present new evidence to support the sentence they believe he should have gotten. This means there is some positivity and hope with the case as this could see him getting a much shorter sentence or even possibly being released with time served. Vybz Kartel will also be taking his appeal to the Privy Council in England. Fans who had their hopes set high were left feeling destroyed.

However, many were of the opinion that justice was served as they mourned the death of Clive “Lizard” Williams, stating that if you do the crime, you should do the time. While many a debate took place in various comment sections on numerous posts as to Clive’s and Kartel’s innocence, a voice note began circulating on social media. In the voice note, which was alleged to be made by Clive’s mother, the woman can be heard speaking quite passionately as she states repeatedly that Vybz Kartel will not be released from jail, and she and her family have cried and prayed over it.

Fans instantly went on the attack and defense in support of Vybz Kartel. But, it now seems that all the fuss was for nothing, as an official statement from the family of Clive ‘Lizard’ Williams was released today, disputing the validity of the voice note being circulated. They began by thanking Jamaicans for their support and stated that they are happy with the verdict that was handed down by the courts. They then went on to clear the air noting, “We would like to state unequivocally that the voice note that is being circulated in social media is not that of Lizard’s mother. That behavior is totally out of character for our mom, and she does not use that language. In addition, Clive was born in April and would have turned 36 on the 11th of this month. He was not born in August, as stated in the voice note.”

They continued, “It should also be highlighted that whomever the voice note is referring to was allegedly killed in February, Clive was murdered in August. While the sender did not claim to be Lizard’s mother, social media bloggers looking for fame and likes have twisted it that way. We truly empathize with the sender – if they have in fact lost a loved one – but ask that they contact the authorities if they wish to share their experience. The Family of Clive’ Lizard’ Williams asks for privacy during this time. We prepared this statement for the sole purpose of clearing up the misinformation being published.” 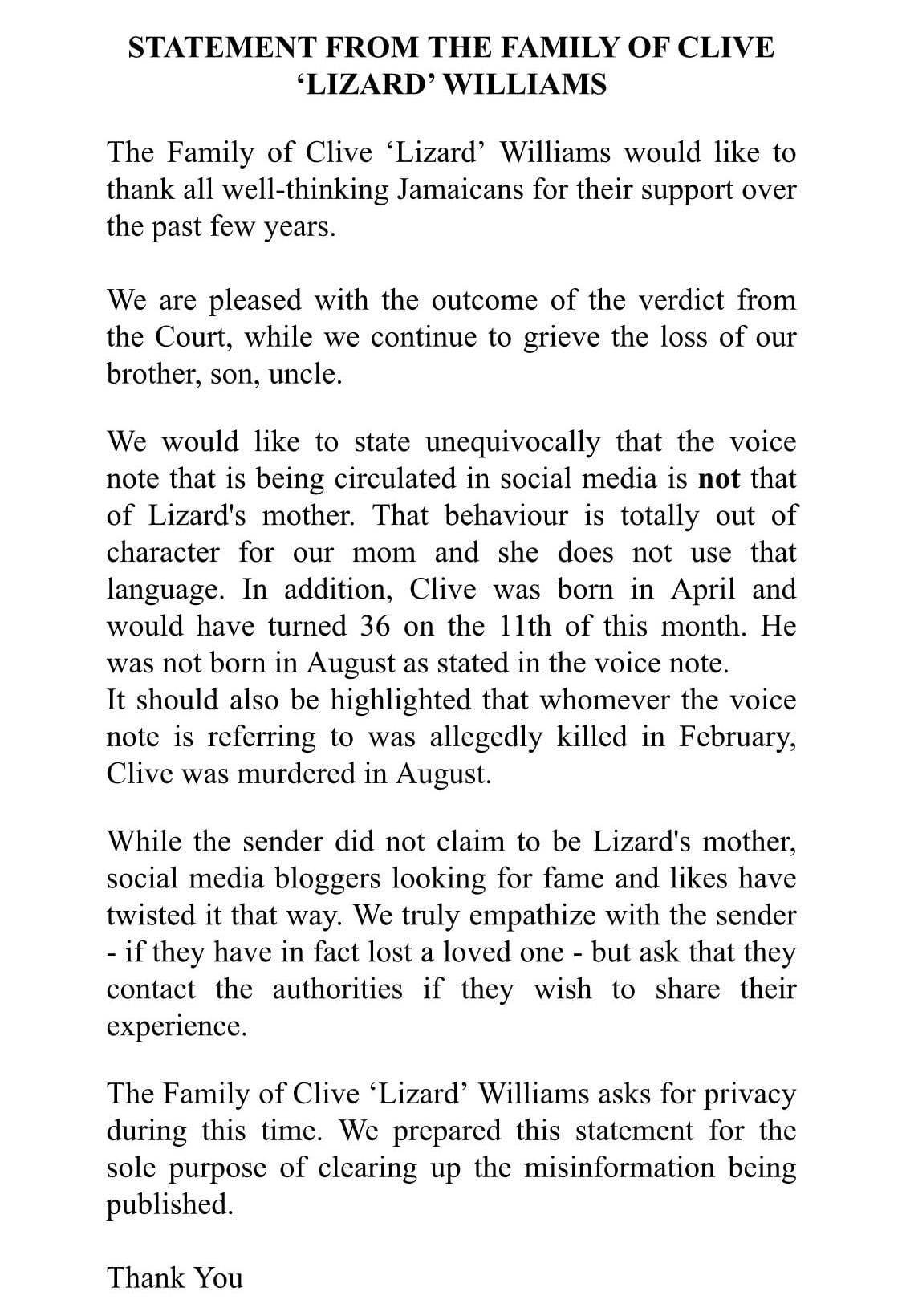 After the release of the statement, many are still using the opportunity to claim that Lizard was in fact a “bad man” and deserved what he got, as well as noting that the victim’s body was never found, so his murder is questionable. One individual noted, “How dem know he got murdered in August ? there is no body so how is there a crime without a body? What a sumn if this man ever turn up? Jamaica system would be ‘fully dunce’.” Another added, “I hope you guys issue a statement for all the men Lizard kill too because according to John public he is not as innocent and in my opinion if you live by the gun you should expect to die by it too.”

Vybz Kartel is a very vocal and active presence on social media, so there is a strong possibility we will get a response to the statement from Clive’s family in short order.

The statement was no signed or dated.