Vybz Kartel clapped back at Mr. Vegas with a scathing statement.

Vybz Kartel is responding to Mr. Vegas after the dancehall artist put out a statement addressing the incarcerated deejay’s criminal case. Recently on social media dancehall artist, Mr. Vegas spoke out about Vybz Kartel’s murder case after an uproar among the Gazanation following the court decision to dismiss the deejay’s appeal. A number of Gaza fans were quick to downplay the gruesome murder of Clive ‘Lizard’ Williams as they protested for their artist to be freed from his prison cell. Mr. Vegas did not take kindly to these sentiments as he found them insensitive and even inhumane.

In a video that Vegas shared to Instagram discussing the subject, he explained his stance and appealed to the emotions of fans who seem to be blinded by the fact that their idol is doing time. “When it comes on to the Vybz Kartel case and the people dem wah put out certain rhetoric, mi find dem disappointing and disheartening,” the “Bruk It Down” deejay said. “Now when a man a guh seh a nuh nutten if Lizard get killed ’cause him a nuh nobody, a nuh nutten if him get killed ’cause him a did bad man, him a did murderer, him a did killer, him a did dis, him a did dat. Mi find dem talk deh very disappointing people.”

Elsewhere in the video Mr. Vegas went on to say that a man of a certain status should not seek to make a criminal out of youth that looks to him for any form of aid but rather to help them become self-sufficient. He explained that a man of power has the social responsibility to “curve troubled youth in a positive way” when they come around. Though he strongly implied that this was not the case with Vybz Kartel, he never explicitly stated that. He, however, pointed out that this was not just about Kartel. 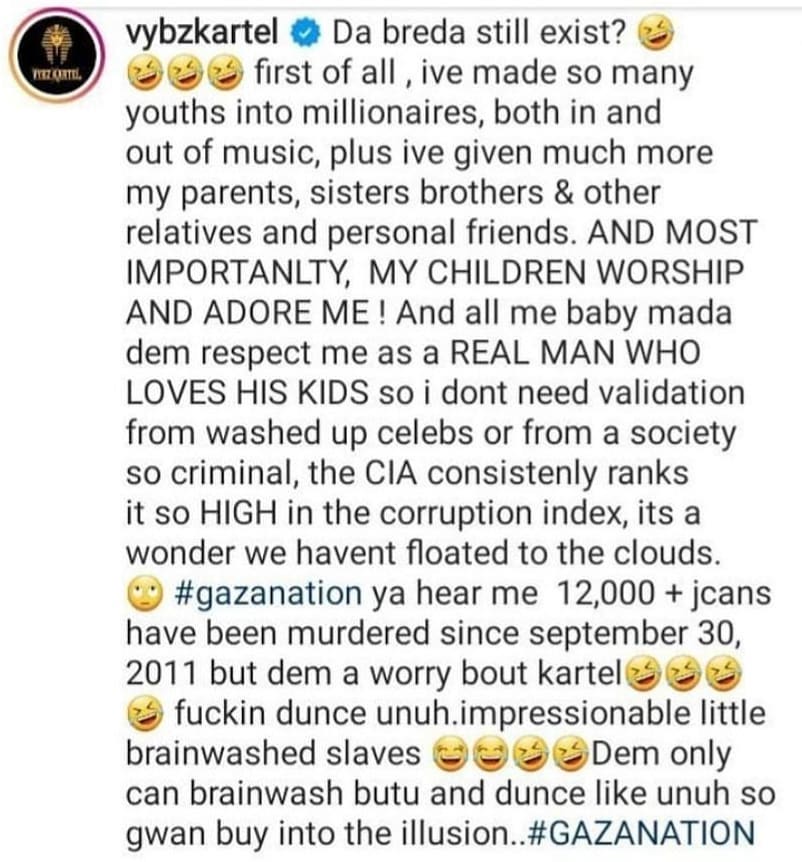 In a post and delete on Instagram, Kartel addressed the video message Mr. Vegas shared with a lengthy caption. “First of all, I’ve made so many youths into millionaires, both in and out of music,” Vybz Kartel wrote. “Plus I’ve given much more [to] my parents, sisters, brothers & other relatives and personal friends. AND MOST IMPORTANTLY, MY CHILDREN WORSHIP AND ADORE ME! And all me baby mada dem respect me as a REAL MAN WHO LOVES HIS KIDS.” he continues. “So I don’t need validation from washed up celebs or from a society so criminal, the CIA consistently ranks it so HIGH in the corruption index its a wonder we haven’t floated to the clouds.”

Vybz Kartel also laughed at the fact that while the government is so concerned with keeping him captive, there have been over 12,000 more deaths since September 30, 2011, when he was first arrested. “Impressionable little brainwashed slaves,” Kartel added. “Dem only can brainwash butu and dunce like unuh so gwan buy into the illusion.”

Vybz Kartel’s criminal case has been at the forefront of dancehall fan’s minds since his appeal verdict was finally read on April 3, 2020. As different people continue to weigh in, the deejay clearly knows where he stands and understands the role that his celebrity status plays in his case. He is hoping to get justice at the Privy Council.