According to mom Jamie King, her son Jamell Demons better known as rapper YNW Melly, should have been released from the Broward County Jail sometime over the past couple of weeks. However, pause in Florida’s regular court proceedings as a result of the coronavirus outbreak has caused his freedom to be delayed. While those were not her exact words, her response to a comment shared below a video of Melly and his friend goofing around in a car sums up that same sentiment. The comment left by the Instagram user asked, “thought he was sposed to been out whaat happened.” Jamie responded by stating, “@__shayy__babbyy__ Coronavirus happened.”

Sadly, Jamie’s words in response to Melly’s release have not always been words to live by. YNW Melly has been in lockup since early 2019. Alongside his fans, his mom has been one of his strongest supporters, hinting at his release throughout 2019, without any tangible reports of his case being dismissed.

With this in mind, her recent comment could just be one of her ways to continue to whip up for the incarcerated rapper. While Jamie has not provided any tangible evidence in the comments, her view does run concurrently with that of the rapper’s ex-lawyer, Bradford Cohen. Cohen cited that he does believe that the prosecutor’s evidence against YNW Melly is weak, and he will not be found guilty of the crimes he is on trial for.

Free My sons nothing is complete without y’all @ynw.bortlen @ynwmelly ??

The 20-year-old Florida native is being charged with first-degree murder for the alleged murder of his two friends Anthony “YNW Sakchaser” Williams and Christopher “YNW Juvy” Thomas Jr., which took place in October 2018. According to police, the “Murder On My Mind” rapper carried out the hit on his friends, then his co-accused Cortlen “YNW Bortlen” Henry aided in making it look like a drive-by shooting. The rapper currently faces the death penalty if convicted of his charges. 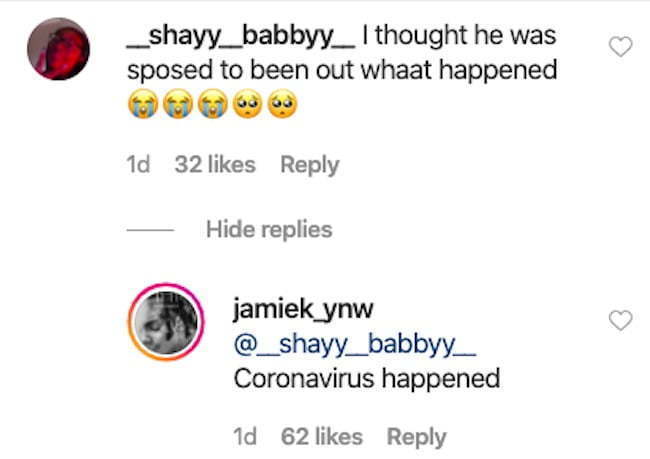 YNW Melly’s fans are hopeful that their hero will be returned to them once this coronavirus pandemic blows over.