Erica Mena is not here for Cyn Santana playing the victim on Love & Hip Hop.

Love and Hip Hop: New York is back and as messy as ever. As we all know one of the most interesting storylines is that of the complicated relationship between Erica Mena, Cyn Santana, Joe Budden and Safaree Samuels, all of whom are featured this season on the show. What makes everything so juicy is that Erica, who is married to Safaree, and Cyn, who has a child with Joe Budden, used to date back in the day, and there seems to still be bad blood between the two of them. Now Erica Mena, is defending herself after fans attacked her for her harsh demeanor towards Cyn.

On Monday night’s episode of LHHNY the ladies sat down to discuss the word on the street that Erica was “playing matchmaker” and trying to set up Joe with his ex-girlfriend, and LHHNY alum, Tahiry Jose. The ex’s went head to head on who was in the wrong. Cyn confronted Erica about the rumors that she was trying to help Joe and Tahiry reconnect. 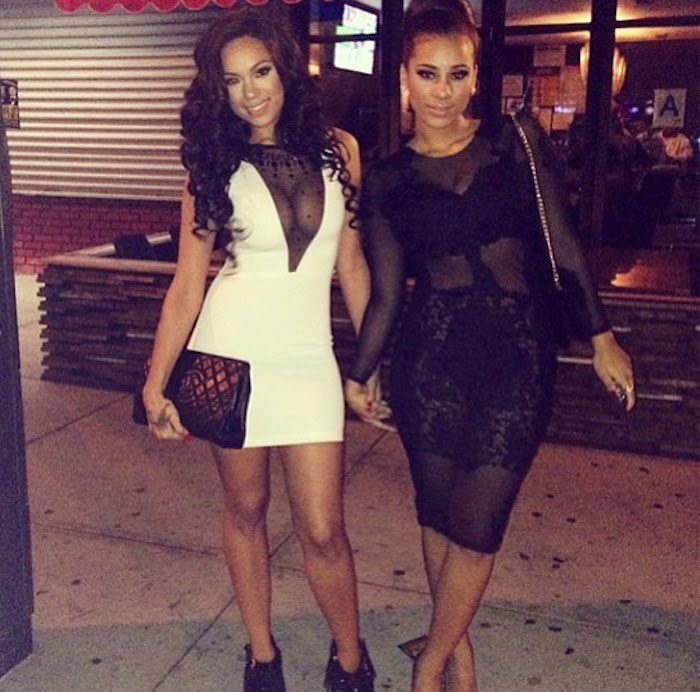 When they sat down to hash everything out Cyn got straight to the point and said, “To me it sounds kinda crazy that you as a pregnant woman did not think, they just broke up a few months ago. I wonder how Cyn [would] feel about that?” Erica countered back saying that she wasn’t even thinking of Cyn while trying to hook up Joe and Tahiry, and that she wasn’t “clocking” Cyn or her feelings about the situation. She proclaimed in her confessional that her loyalty lied with Joe and Tahiry, not Cyn.

The conversation continued to get heated and eventually brought Cyn to the point of tears. Erica wasn’t phased in the moment even telling Cyn, “Once again you start crying to make me look like the big bad wolf.” Cyn eventually got up and walked away from the table, and Erica said she felt unfazed by the entire incident. However, Erica must have been taking a lot of heat on social media about the incident so she took to twitter to speak her mind and clap back to some fans that were not feeling her actions.

Cyn is having a hard time dealing with the fact that Erica is trying to get Joe to move back to Tahiry. But Erica shows NO REMORSE! ???

Catch up on all things #LHHNY On Demand, on the VH1 app or online! pic.twitter.com/fkNFnMfbS6

“You females are funny,” the reality star said Tuesday morning after the show aired. “So when table talk was happening and motherf*ckers was sitting around gossiping crazy about Me & rumors on my husband y’all wasn’t screaming out “ be a woman first” Now that y’all see tears I’m all these disgusting things?! Okay got it.” Erica admitted that she didn’t come off in the best light on Monday’s episode but blamed it primarily on editing by the producers. She went on to respond to a fan who came to Cyn’s defense, claiming that she owed her no loyalty and that Cyn has also done her wrong since they split up.

“If it’s about being a decent human being why was it okay for her to sit around to help spread blog rumors with an individual she befriended only because they are my enemy?,” Erica said. “Feelings?! The same feelings she had when she made people attack my husband because he was with me?! B*tch” She then reminded fans that this LHH is a television show and said she should not be receiving death threats behind it.

The tea is honestly boiling on Love and Hip Hop: New York this season. We’ll just have to continue tuning in to VH1 every Monday to see how all this messiness turns out.

Check out Erica Mena’s comments below.

You females are funny. So when table talk was happening and motherfuckers was sitting around gossiping crazy about Me & rumors on my husband y’all wasn’t screaming out “ be a woman first” Now that y’all see tears I’m all these disgusting things?! Okay got it.

I understand how it looks. But when will y’all understand editing is going to show you what it wants to show you. Certain people celebrated at my babyshower for a reason. And that scene from last night was one of them. If I was really all these things why am I ALWAYS blessed?

If it’s about being a decent human being why was it okay for her to sit around to help spread blog rumors with an individual she befriended only because they are my enemy? Feelings?! The same feelings she had when she made people attack my husband because he was with me?! Bitch? https://t.co/hlOzmpN6H9

Yup I always know exactly what I’m doing! Living my life and never thinking for a second about my past. Especially those who are apart of it! https://t.co/Xmy17LFcPB

At this end of the day this is a television show. And to be receiving death threats off this is completely disgusting. No one is perfect but we all are great at our job. To threaten someone because they get their job done is sick.