Cardi B and Offset’s adorable baby girl Kulture just turn one on us.

Time flies when you’re the daughter of one of the biggest stars in the world. Believe it or not, Cardi B and Offset‘s daughter Kulture Kiari Cephus is already turning one. Wednesday marked the celebrity baby’s first birthday. Cardi took to Instagram to post a photo of her and baby Kulture celebrating Tuesday night with cupcakes and balloons. Last month, the couple dropped $100,000 on a diamond necklace and revealed that they’re spending an additional $400,000 on her birthday bash.

The caption reads, “Alittle 12 o clock turn up. My baaaaaaaybeeeeeeee.. Ok goodbye.” The photo had us all in our feelings, and many celebs commented wishing culture a happy birthday including dancehall queen Spice and deejay Vybz Kartel. 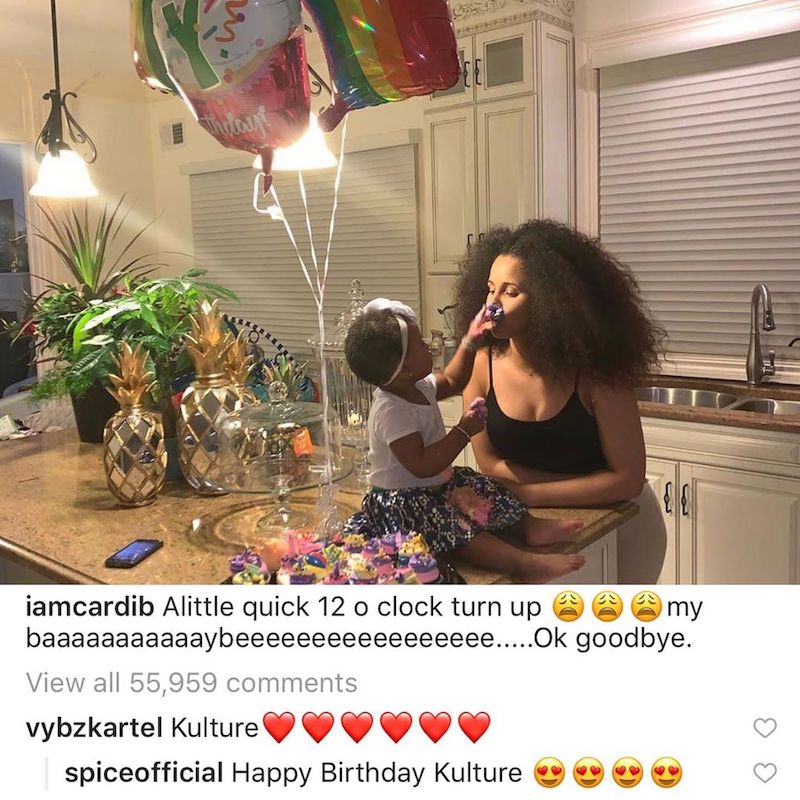 Vybz is currently serving time in prison after being convicted in 2014 for the murder of Clive’ Lizard’ Williams. With a possible appeal verdict on its way in the next two weeks, it looks like Vybz still made sure to take the time and send Kulture some love.

Migos band member Offset also posted a photo of his fourth child saying “YOU ARE SO PERFECT LOVE YOU KK HAPPY 1st BDAY LOVE YOU.” In it, the adorable toddler is wearing a shirt that reads “50% Kiari, 50% Cardi = 100% Kulture” Kiari Cephus is Offset’s real name.

In April 2018, Cardi B took the world sort of by surprise when she revealed her pregnancy while performing on Saturday Night Live. Rumors were swirling about the Invasion of Privacy rapper’s possible pregnancy for months prior, and Cardi decided to let the world know on her own terms.

Since giving birth, she and Offset faced challenges in their marriage that led to divorce speculations, but the two were able to move past the very public breakup. The Bronx-born artist took home the Grammy for Best Rap Album at the beginning of this year for her debut album Invasion of Privacy that went certified double platinum.