Erica Mena slams new reports claiming that she and Safaree Samuels were fired from Love and Hip Hop.

Erica and her fiance Safaree have been rumored for weeks to be given the axed from Love and Hip Hop, but the 31-year-old actress/model is now dismissing those reports. Mena posted a screenshot of the story on her IG Story where she wrote “The lies.” She completed her caption with a crying laughing emoji.

Safaree Samuels has remained silent about the rumors. He reportedly turned up late for the Love and Hip Hop reunion and was subsequently put on the chopping block for his actions. Erica also recently defended her man after Joe Budden attacked him during a trip to Costa Rica. Budden was reportedly angry before Safaree brought Erica on the trip and didn’t tell him. 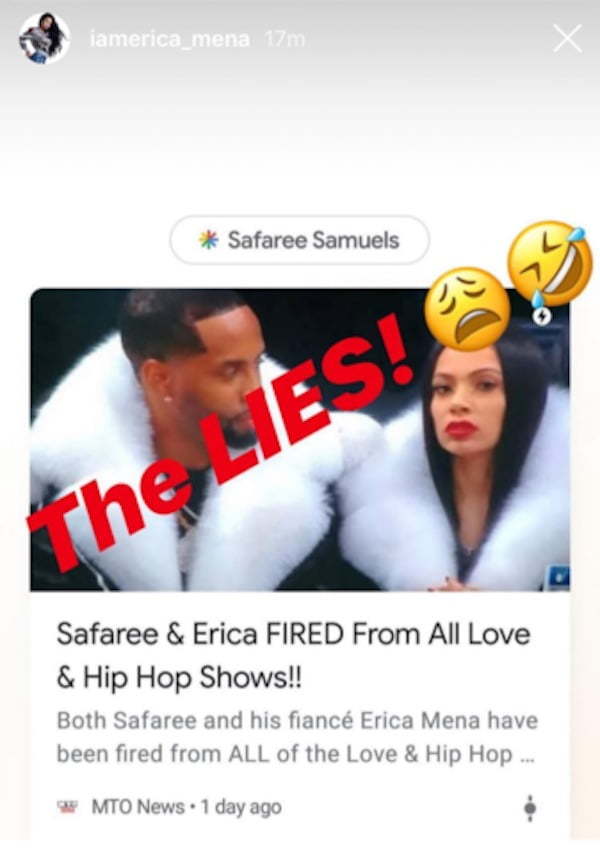 Erica Mena and Joe Budden’s wife Cyn Santana used to be in a relationship. Mena and Samuels recently launched their new YouTube channel where they’ve been sharing their love story with their fans. The couple is also planning to announce her pregnancy on the channel, She’s Crazy, I’m Not.

In their first episode in the channel, Erica broke down in tears after Safaree revealed to her his big plans for them.