Vybz Kartel appears to have taken another jab at Mavado.

Maybe it’s time for Vybz Kartel and Mavado to go back in the studio and release some diss tracks. The two dancehall giants have been engaged in a back-and-forth war of words on Instagram, and it seems there is no ending to it anytime soon. The incarcerated Gaza boss drew first blood when he told the Gullyside singer and one of his fans to go “s*ck u mada.”

Vado responded with a lengthy statement on the Gram where he called Kartel an envious deejay who does nothing for dancehall. The “So Special” singer also spoke about his accolades since stepping into the game fifteen years ago, a few years after his nemesis.

Vybz Kartel appears to respond to Mavado’s statement in another post on his Instagram page where he also shared a snippet of his classic single “The Best Of Them.” “Badmind get di best a dem,” the deejay wrote. 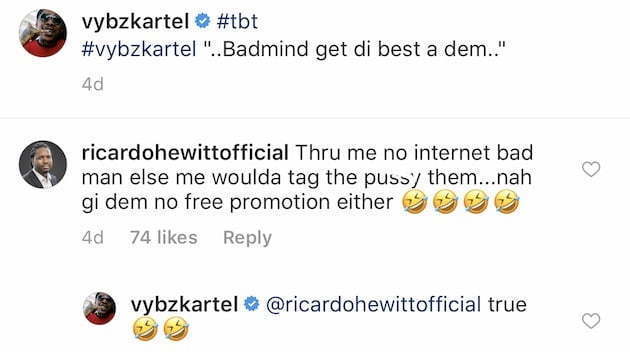 One Gaza left a comment on the post that reads, “True me no internet bad man else me would a tag the pu**y them. Nah gi dem no free promotion either.” Vybz Kartel commented on the post saying, “true.” He also added a few laughing emojis. Another fan commented on that fan comment and tag Mavado.

At this point, the leaders for the Gully and the Gaza should settle this in the studio.