NotNice produced a number of hits for Vybz Kartel in the 2000s and was once the go-to producer for the dancehall ace, but in 2011 they had a bitter fallout that saw the incarcerated deejay sending armed men to confiscate the producer’s engineering equipment. The producer says that he was hurt by the incident and during a 2014 interview with ER, he said that he will never forgive the artist and former friend for what he did.

“No forgiveness cannot be there because there was no explanation,” NotNice said. “I was in thin air I don’t know what transpire. How should I forgive you when I give you a chance to explain yourself and you not even said anything.”

Seems that’s all now water under the bridge and NotNice may have now forgiven Kartel for what he did back then. The producer posted a photo of Vybz Kartel’s 2003 album Up 2 Di Time. What was special about that particular copy of the album is that it was given to him personally by the Gazanation Boss. “@djwizzzle from #2k3 Was a fan before mi produce the first song @vybzkartel nuff respect. Christmas eve 2003 #timeless,” NotNice wrote in the caption. What was even more striking was that Vybz Kartel liked the photo. 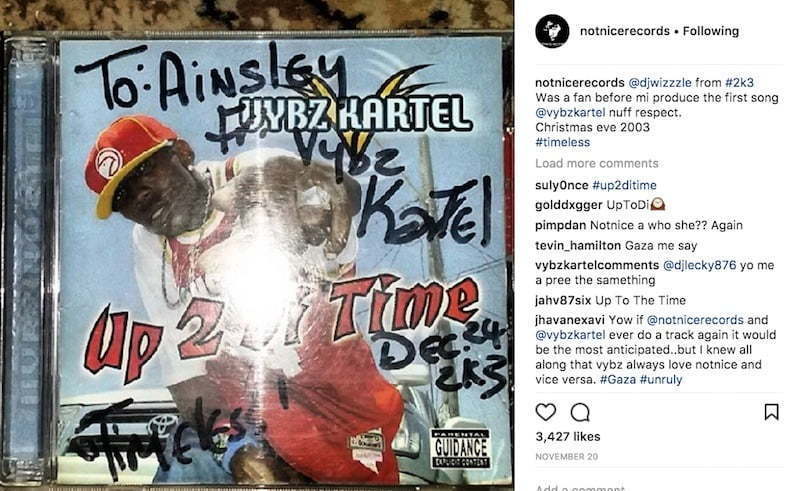 Sources told us that NotNice and Vybz Kartel are still not on speaking terms, but this is a gesture in the right direction. “They have a lot of history and make a whole lot of hits over the years so this could be a good thing for them to link back up and make music again,” our Gaza source said. “A decade is enough time to heal wounds and we already see signs that Kartel is making peace with other people who he once had issues with like Bounty Killer, Rvssian.”

In an interview in 2014, NotNice says that working with Vybz Kartel and Alkaline has damaged his career because of their controversial image including skin bleaching and lyrical content.