Chris Brown is certainly not a fan of Kehlani. The “New Flames” singer took to his Twitter page on Tuesday night to blast the 22-year-old R&B singer after calling her suicide attempt as a publicity stunt.

Earlier this week, the Twitterverse went in on Kehlani calling her a cheater following her split with Kyrie Irving and reunion with PARTYNEXTDOOR. She took it very hard and attempted to commit suicide.

Chris Brown stance is that the NBA player is his friend and does not deserve the heartbreak.

“There is no attempting suicide. Stop flexing for the gram. Doing sh** for sympathy so them comments under your pics don’t look so bad,” Breezy tweeted before calling Kyrie the real MVP.

“I’ll be the BIGGEST PIECE OF sh**. But ima ride for my Homies regardless. KYRIE is probably one of the only good guys left. IDGAF,” Brown added.

“OK IM DONE. Guess she gone have to watch the games from a real “box” now. “THE TELEVISION” #OHB “OUTTA HERE BIH,” Chris Brown said before signing off for the night.

OK IM DONE. Guess she gone have to watch the games from a real "box" now. "THE TELEVISION" #OHB "OUTTA HERE BIH"

I'll be the BIGGEST PIECE OF ?. But ima ride for my Homies regardless. KYRIE is probably one of the only good guys left. IDGAF!!! 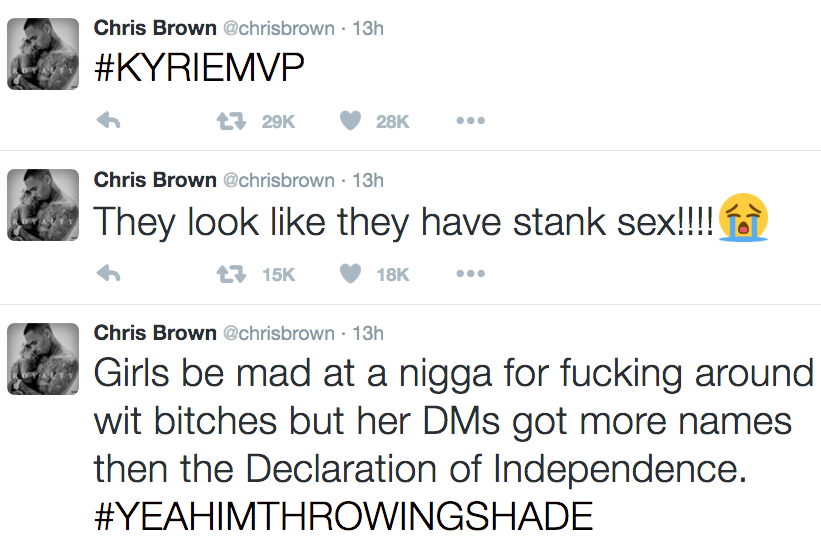 Kehlani Parrish has not responded to Chris Brown but she did responds to her critics saying that she is not a cheater.

The Oakland singer has also been getting support from other celebrities including Keyshia Cole, Questlove, and Nick Cannon who visited her in the hospital.

“Had to go grab my Youngen,” Cannon said.

Chris Brown showed no mercy and went on to wrote on Twitter, “The amount of followers I got and the amount of comments are the amounts of f***s I give.”

Kehlani also thanked PARTYNEXTDOOR for helping saved her life during her attempted suicide. She is also making it very clear that she did not cheated on Irving saying that they were already broken up when she hooked up with her OVO ex-boyfriend.