On Thursday and Friday of this week, the prosecution witness came under pressure from the defense attorneys representing Vybz Kartel and his co-accused.

Kartel, whose real name is Adidja Palmer, is on trial for the alleged murder of Clive “Lizard” Williams. The dancehall star is jointly charged along with protege Shawn “Storm” Campbell, Kahira Jones, André St John, and Shane Williams.

The Case Of Vybz Kartel Murder Victim, Could He Still Be Alive?

This week the prosecution introduced their star witness Lama Chow to the stand where he gave some damning testimony.

According to Chow, Vybz Kartel and his co-accused murdered his friend Lizard and attempted to give him the same fate before he escaped.

Attorney Pierre Rodgers, who is representing Kartel’s co-accused Kahira Jones, questioned Lamar Chow about his handling of an illegal firearm believed to be belonging to Vybz Kartel on the day he and Clive Williams were allegedly attacked at a house in Havendale.

Chow denied having the gun on the day in question, August 16, 2011. When pressed further, the key witness again denied handling of the gun, not knowing whats coming next.

Rodgers then asked Chow to read a paragraph from the official statement he gave to police.

One of the sentence from the script reads, “Bandit take out a gun from the back of his waist and give it to me.”

Lamar Chow then nervously admitted that someone handed him the gun and he had told officers that he did handled the firearm.

However, he said he was not lying in his statement because the gun was handed to him when he went home in the night after the attack had took place.

Chow told the court that a man name Bandit gave him the gun to lock (hide), which he later buried. 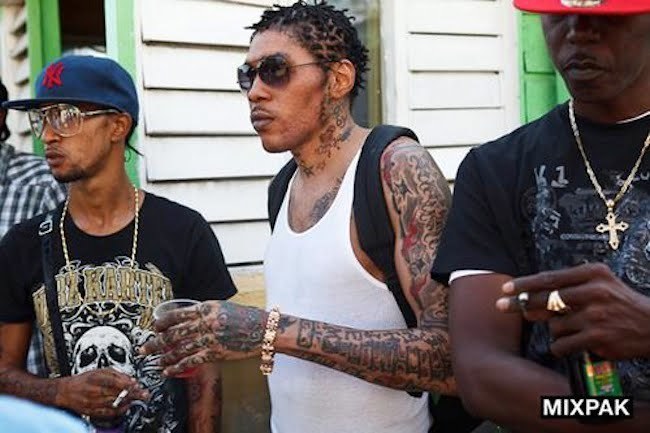 The prosecution key witness, Lamar Chow, also told the court this week that Vybz Kartel and Shawn “Storm” Campbell bought a plane ticket for him to fly to Guyana with them two days after the attack because they did not want him to be questioned by anyone about the incident.

Attorney Miguel Lorne, who is representing Shawn Storm, also took a shot at the star witness, grilling him about the plane ticket he testified about.

When asked which of the statement is true, Chow said the ticket was already bought.

“So you tell the police a lie?” the attorney grilled the witness.

Witness denied that his story was fabricated with police help

Lamar Chow, who is now the center of the murder trial, also denied allegations by the defense attorneys that he fabricated the story with the help of police officers to avoid being charge with murder and possession of an illegal firearm.

Chow also denied that he had written a letter to the public defender expressing that he does not want to go to court because he had seen Clive Williams after the alleged attack took place.

The trial continues on Monday.