Popcaan is looking to extend his international influence by linking with Canadian rapper/singer Drake.

Popcaan was in the North American country for two shows over the Caribbana Weekend. The former Portmore Empire deejay was in fine form when he performed in front a packed audience at the Sound Academy in Toronto.

For the most part Popcaan has been extremely busy touring all summer in Europe, the Caribbean and Canada.

“It’s been a crazy summer but mi give thanks, especially to all di fans that show up and pack di shows,” Popcaan told the Star. “Di fans dem mad, dem fry. Canada always shows me nuff love; respect to the Canadians fans straight.”

While touring in Canada Popcaan met one of his celebrity admirers, Young Money star Drake backstage his OVO Fest concert.

“I met Drake backstage at OVO Fest, then linked again at the after party on Sunday, (August 5th),” Popcaan said. “After that di vibes did mad so we went to two private parties on Monday, following di show.”

“Meeting Drake was good; he’s cool and wants to come to Jamaica again. Him rate my ‘Yiy Change’ mixtape. His whole crew knows the mixtape well. He likes my music and knows all di slangs,” added the Fry Yiy deejay.

Drake is also a close friend of Mavado whose infamous beef with Popcaan’s former boss Vybz Kartel made him a dancehall giant. 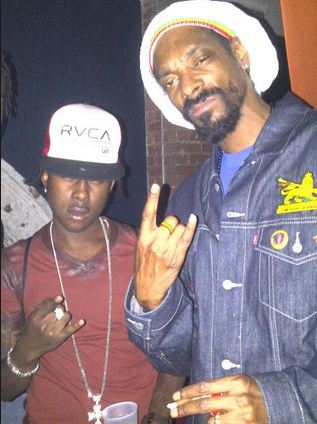