Spice’s son, Nicholas, celebrated his 14th birthday last the weekend with some famous faces like Missy Elliott, Yandi Smith, Unruly Squid, and Jada Kingdom who helped him cut his cake and added a kiss on the cheek.

Spice always goes above and beyond for her children, so it was no surprise to her fans when she featured the party on her Instagram Story. Last year for his 13th birthday Spice, coveted his door to the living room with expensive gifts in their family home in Atlanta. This year’s birthday bash, being no less extravagant than the previous, was held at her home in Jamaica featuring many well-known stars.

Special guests amid the party were Popcaan‘s sister Unruly Squid, Jada Kingdom, and a few of the Love and Hip Hop cast, Shekinah and Yandy. Spice posted a video on her Instagram Story of herself dancing with Squid and Jada, whose song “Budum” played in the background.

This heartwarming scene was followed by a picture of Nicholas on her page with the caption, “Stop what you’re doing and help me wish my first born @official.nicho a HAPPY BIRTHDAY (celebration emojis) (gift emojis) I Love you infinity son. I would die for you no questions asked. Thank you for changing my life. Don’t forget to stream his song on my Album called PO-PO!”

The young star has been making moves and recently recorded his first song, “Po-Po,” as a feature on Spice’s new album, 10.

Spice’s boyfriend, Justin Budd, didn’t miss a chance to show his love for the boy and posted a reel of adorable photos of the birthday boy captioned, “Everyone if you haven’t already, wish my Lil boy @official.nicho a Happy Birthday!!! So many great memories we are developing together!! Love you son!!! Let’s continue to grow!!” Popcaan joined in and also posted an Instagram Story posy of the little man saying, “@official.nicho up yuhself.” 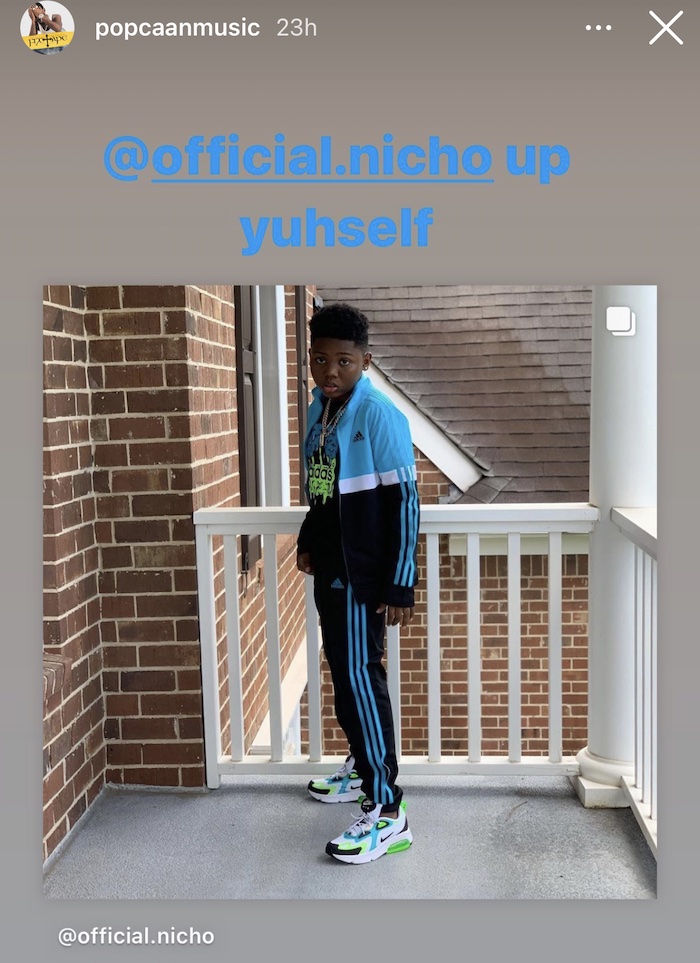 The night continued on with a feature of the best part of the birthday- cutting the cake!

Jada Kingdom performed the cake cutting with the teen and kissed him on the cheek.

Missy Elliot was among the well-wishers with a heartfelt video. She said, “Nicho, I just wanna say happy birthday from Missy Elliot and I hope you have a beautiful, beautiful birthday. Listen, you got such a bright future ahead of you so you can be anything you wanna be. Don’t let anybody stop you. Just always remember that and happy, beautiful birthday. Happy, happy birthday, aiite.”

The entire party went off without any hitch, despite fans biting their nails to see anything from his estranged biological father, Nicholas Lall. Nonetheless, only well wishes were seen from his side as he posted a video of himself and his kids with the caption, “Help me wish my son a happy 14th birthday,words can’t explain the love I have for you I just want you to know that I love you and will continue to love you from a distance. Happy birthday Nicholas #youwillalwaysbemygeneral #IAMNICHOLASLALL #AMESTILLAWIN @official.nicho.”