Johnny Wonder is fuming at Shenseea for not crediting Skillibeng in a new interview.

Shenseea’s recent freestyle on the Adde Instrumental-created “Crocodile Teeth” riddim sparked a range of positive comments when it went viral, but music producer Johnny Wonder did not hold back on bashing the artiste for not crediting Skillibeng for being the creator of the hit song following a new interview.

The “The Sidechick Song” singer instead acknowledged Nicki Minaj, who jumped on the song months after it had already made its rounds.

During the Nessa On Air show which was broadcasted on Tuesday, the host hailed Shenseea for the freestyle and questioned who chose the beat. “It was me; it was me. I know that beat is going crazy and I love the beat,” Shenseea started. The host interjected: “Shoutout to Nicki Minaj for sure.”

Maybe this was where fans had expected the “Upset” artiste to interject and hail the original creator, Eastsyde Prodigy, Skillibeng, but instead, the deejay just went along. “Yeah yeah, yea, for sure”, she responded.

Of course, this did not sit well with Johnny Wonder, who produced the original track. Wonder got wind of the whole situation after he was tagged by the Brando Music Review Show to a clip of the interview. Brando also fired an onslaught of shots at Shenseea in the caption of his post.

A furious Johnny Wonder sounds off in the comments section of the post calling Shenseea an opportunist.

“INTERSCOPE (Shenseea’s label) BEGGED ME,” the producer started. “She never thanked us; Dont Get Me Started, Tired of her now; why didn’t she use @rvssian @djfrass or jordon’s riddim?” he continued in four separate comments.

Wonder then went on to diss Shenseea, claiming she was not competent to ride the beat. “So @shenseea stay. i shouldnt have signed the waiver. but they begged me. KMBCT; she couldn’t even ride the official riddim she had to use the lick over one from youtube. KMT.” 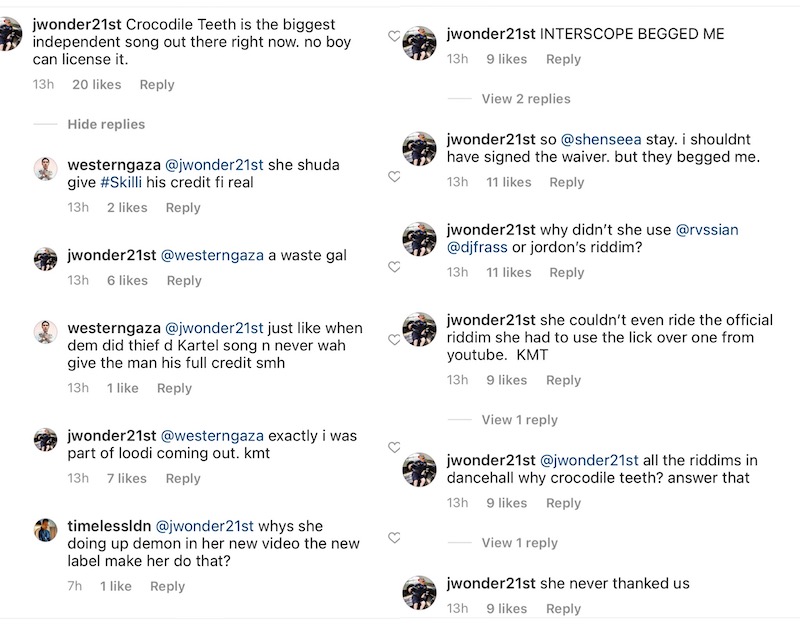 The producer apparently could not keep his cool and went all out to protect his intellectual property.

In another comment, he said, “Crocodile Teeth is the biggest independent song out there right now. no boy can license it.” 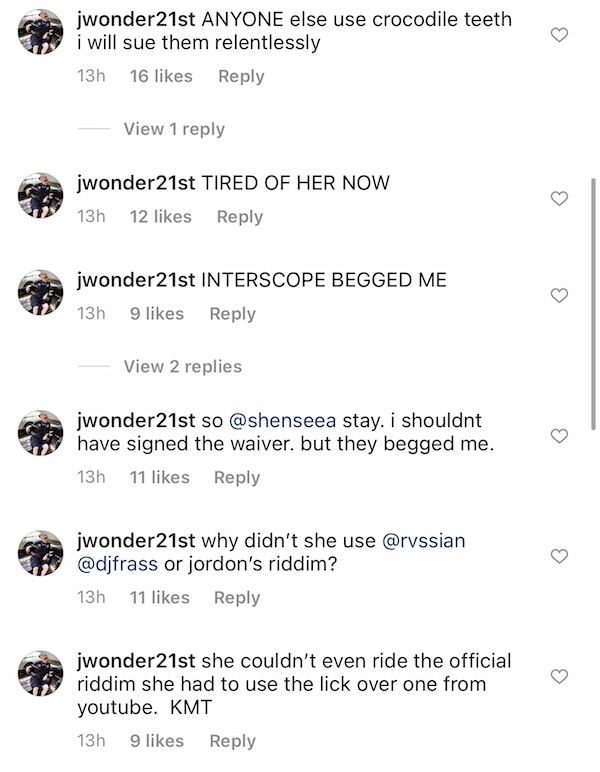 Things took an even bigger turn when another user utilized Shenseea’s track with Vybz Kartel, “Loodi”, to highlight that she often takes credit for other individual’s work. To that, Wonder noted, “@westerngaza a waste gal.”

“Crocodile Teeth” was remixed by Nicki Minaj and was released among three songs on her new mixtape “Beam Me Up Scotty,” (originally released in 2009). While Nicki’s verse on the song enhanced the journey to success, December 2020 single was already making strides on its own, and this cannot be denied.