Spice’s long-awaited album, 10, was released on Friday (August 6), and the Queen of Rap, Nicki Minaj, has extended her congratulations.

The Trinidadian-born rapper and lover of Dancehall took to her Instagram story to applaud Spice for her work. “Rrrraaaahhhhhhhh Congratulations @Spiceofficial I’ll let y’all know my fave track tonight,” she wrote on a picture of Spice’s cover art.

Spice has undoubtedly earned her title as the Queen of Dancehall, but this is the deejay’s first album after over 20 years in the industry.

The 15-track album has been receiving a range of positive feedback so far, with songs such as “Send It Up,” “Po Po” featuring her 14-year-old son, Nicholas, and the introduction “S.P.I.C.E” appearing to be the fan favorites. 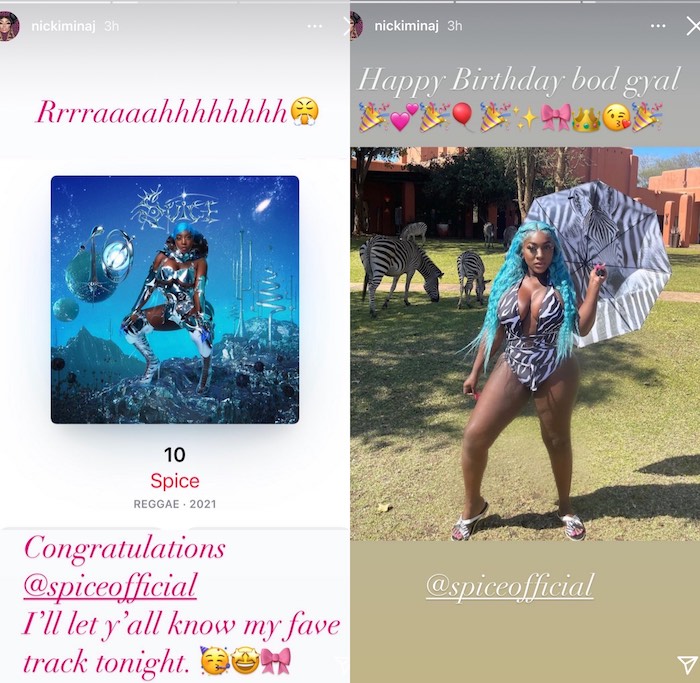 As Spice had explained in an Instagram Live just before the big release, the album is a diverse compilation of songs, ranging from an old school reggae tune, “Don’t Care” to raw and raunchy dancehall songs such as “Size Matters,” to even a motivational song about self-love, “Love Her.”

Many fans and fellow Dancehall compatriots had congratulated the deejay on the project. “Well done,” Stylo G commended. “You really did that mama, so proud of you,” another person added.

“Go run them up enuh @vybzkartel @spiceofficial dancehall caa stall,” wrote Popcaan as he shared the artwork for both albums.

The album is already making strides in less than a day of its release. Spice was celebrating the project being Number 1 in the U.K on the iTunes Reggae chart and Number 29 in all genres. The “Needle Eye” deejay simultaneously celebrated 10 being the No. 1 Best Selling album on Amazon Movers and Shakers, No 1 Best Seller International Album and No. 5 in all genres.

Spice, who is also celebrating her birthday today, declared, “Best birthday gift ever!!” on her Instagram.

The album was originally set to be released on July 30, exactly one week before Spice’s birthday, until it was pushed back some weeks before. Spice was still overwhelmed and excited and asked only that her fans support her music as a birthday gift, and it seems this dream is coming through.

So while Nicki applauded the album on her Instagram story, the rapper completed the commendation with a birthday wish. “Happy Birthday bod gyal,” she captioned a photo of Spice in her black and white bodysuit that was taken during her recent trip to Zambia.

Happy birthday and Congratulations to Spice!