Nelly and his longtime girlfriend, Shantel Jackson, have split with Nelly, stating that the pair broke up in 2019.

On Saturday morning, Shantel Jackson confirmed the news to a curious fan who asked if she and Nelly were still together, to which she said they were just friends.

The couple made their relationship official in 2014 before calling it quit in 2019. Still, according to Jackson, they now enjoy a friendship. A curious fan asked aked her, “R u (and) Nelly are still together, I love seeing them together,” and Shantel replied, “No we’re not … just friends.” 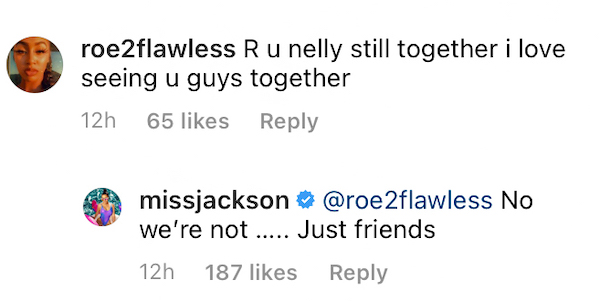 Some fans were surprised by the news of the breakup as Nelly in 2020 in an Entertainment Tonight interview said he couldn’t imagine life without her and even hinted that marriage was on the horizon for the couple.

“I don’t want my life to not have Shantel in it,” Nelly said. “We have been seeing each other for five or six years. Anytime you can connect with someone like that, it works in the long run. She is sweet, beautiful, and the more we get to know each other, she is just as beautiful on the inside. “

The rapper in the past was involved with Ashanti, but that relationship never worked out. However, it could have to do with his thoughts on marriage which he held in high regard, as explained to People magazine in a separate interview.

“For me, the thing about marriage is … I take it very, very seriously. It’s something I only do once, ”he said. “For me, it’s almost as if society would have preferred that you were married and divorced, and then you would have tried to get married and stay married. It is more important to me to die married than to have been married, and it didn’t work out. I want to leave this place knowing that I was in love and that someone loved me and that we were together, and then say, ‘Well, I’m never getting married again, and I’m broke.

Nelly, who reacted to the news, said the couple has split for almost two years. “well actually just 5 years ended 2019 haven’t been together for the past 2….. ok now y’all know,” he posted on a Shade Room post which said they have split after seven (7) years.

Shantel Jackson, who was previously engaged to boxer Floyd Mayweather, got with Nelly in 2014. She publicly supported him, including in 2018 when he was charged with rape. She was also part of the rapper’s reality TV series until it stopped showing.