Vybz Kartel’s former manager, Rohan Butler, is speaking out for the first time in 15 years.

Over the past two decades, Vybz Kartel has managed to cement himself as one of the greatest acts in dancehall music. His rise rivaled the likes of Bounty Killer, Beenie Man, Shabba Ranks, among others, as the most influential and commercially successful acts. His rise to fame has been a combination of trials and failures. He has squared off against his former mentors, coworkers, and even the Jamaican government. Yet, the rebel-like figure has still managed to captivate audiences across the globe, even while being behind metal bars for the past decade.

The early days of Vybz Kartel’s career saw him working with his Rohan Butler. The elusive manager who has somehow managed to keep everything off the record for over 15 years has now come forward to give his take on Vybz Kartel’s career and how he aided in creating the modern King Of Dancehall.

Butler, who first started in the entertainment industry through his video signage and party promotion business, would go on to introduce Vybz Kartel to some of the biggest names in Jamaica’s music fraternity, including Bounty Killer.

Rohan Butler sat down for an exclusive interview with Winford Williams of OnStage shot in Atlanta, Georgia. Throughout the near one-hour conversation, Butler spoke on recognizing the talent Kartel possesses the role he played in bringing that talent to the forefront and the misunderstanding that led to them falling out. Butler explains that he first noticed Vybz Kartel deejaying on a stage show from a clip that was being displayed on a cable channel even though both men were from the Waterford community in Portmore. 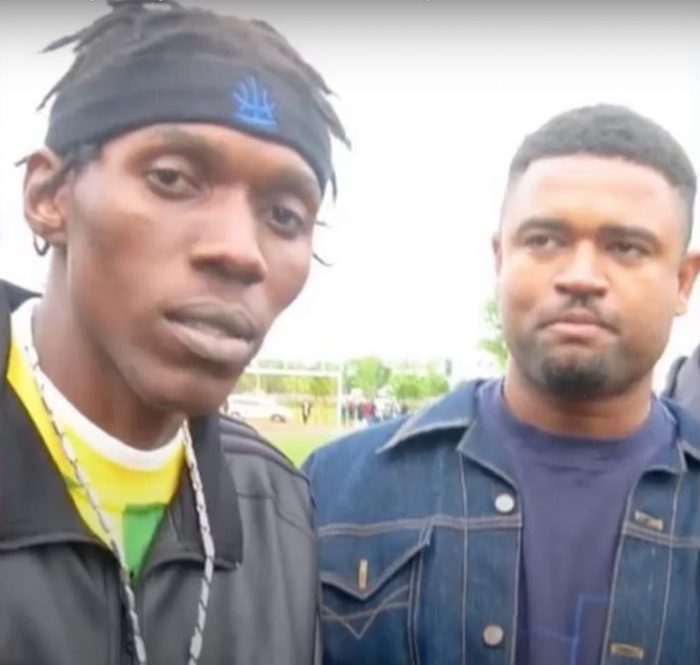 Vybz Kartel was not a loner, and the name Vibe Cartel was actually the name of a trio of Mr. Lee, Escobar, and Addi Banton [Adijah Palmer] being the star of the group. As explained by Butler, Kartel was the main writer while the others helped with vocals. He arranged a meeting with the group through the videographer who captured the footage, and they were soon listed on a lineup for an upcoming party alongside Monster Shack Crew.

Following a brief meeting at Butler’s home, he secured the right to manage the Vibe Cartel group. Buttler’s managerial expertise was first tested on gimmick act Lecturer, and popular dancer turned artiste Bruck Up. Those two acts would later migrate and form their own legacies abroad, opening the channel for Vybz Kartel’s crew.

His close ties with party and event promoters led to The Cartels securing several bookings in and around Portmore. However, it was a booking on Champions In Action, the annual event held on the grounds of Jam World Portmore, that led to a dissolving of the crew and the young manager firing his fledgling trio. All members of the group were given a 3:00 PM meetup time to perform for 5:00 PM. However, Palmer was the only one who arrived on time. This prompted Butler to have Palmer perform two solo tracks before the group took to the stage to do the rendition there were known for.

Kartel’s performance earned him a nod from industry greats King Jammys and Jack Scorpio, who were standing next to Butler. Shortly after the performance, he decided to cut ties with the group due to their unprofessionalism. However, two days later, Palmer returned, stating he would chart the course alone.

The name change was minimal, switching from Addi Banton to Vybz Kartel and ultimately setting the pace for a flourishing career aided by dancehall’s resident Warlord and poor people governor, Bounty Killer.

Butler’s prior dealing with Killer began through his screen renting service for Bounty’s annual party Saddle To The East. He approached Bounty Killer with a proposition to have Kartel perform alongside him, but Killer declined because he did not know him. Bounty Killer would later offer Kartel his props through Butler after revising the tape for the show.

It turns out that Butler had a brilliant strategy to set the link with Bounty even if Kartel was not on board at first. Butler proposed that Vybz Kartel provide Killer a recent song titled “If Addi Ruled The World.” Butler provided the tape to Killer after a few attempts to meet up at a carwash.

“I took him to the studio, I did a demo, went to the carwash all by myself cause I know how Bounty stay eno. Bounty is not a man wa you can just go a carwash and walk up to like that. It going to take you hours or up to days to talk to him. Cause even though I met him before, I still can’t just see Bounty and walk up to him like that eno. So I wouldn’t take Kartel on that journey. I had the time so I go to the carwash and I sit and Bounty don’t even turn up and I had to leave but one day eventually he turned up and I gave him the cassette. It was actually two songs on the cassette that I gave him. So he took the cassette and say okay he is going to listen to it,” Rohan recalled.

“So one morning now just drop off me baby mother at work. She usually work at Ministry of Labour. When I was on East Queen St heading back to Portmore my phone rang. So me say ‘who dis?’ Him say Bounty. Me say ‘which Bounty, come offa me phone man bout Bounty’ and hang up. So me phone ring back again and me answer and say ‘who dis wa you want?’ The man say ‘Butler wapm to you, you can’t believe say a Bounty Killer a call you?’ So that’s when me say ‘A Bounty fi true’ cause my phone never ring yet and is Bounty Killer it’s always face to face we talk. And him say ‘we listen the tape eno, me and Garth did a drive go ova a Helshire and we listen the cassette. Him bad man.’ Him say, ‘when a artiste good him good but that artiste ya him wicked.’ “Even now me a talk me a feel it,” he said gesticulating that excitement and shock he felt some 2 decades ago.

The move paid off, and very soon, Bounty Killer proposed a linkup to record the track for Jamaican producer Computer Paul. Not happy with Paul’s work, Killer would later take the song to Jammys’ to get it redone. Vybz Kartel would later become a part of Bounty Killer’s Alliance and accompanied Killer on stages such as Fully Loaded. Collaborations such as “High Altitude” and “In My Eyes” with other members of the Alliance.

“So Bounty a say ‘him yea man him bad man, we affi go do some work.’ Me a say, ‘good.’ Me go home and me tell the deejay. So the deejay at met computer Paul way before he met me through a guy wa name Lez. Lez is an engineer. Lez used to work over Computer Paul studio too, Lez live in Waterford. So Kartel make me meet Computer Paul who had a riddim. So we make Computer Paul know say we can probably get Killer fi voice pon the riddim. So because me wa buss Kartel now, Computer Paul say, ‘anyhow you make Killer voice me ago buss Kartel. And true Computer Paul do the Corduroy Riddim me know him as a big producer so me believe in him,” Butler continues.

“Me no think him ago sell me no gyow you know. We talk to Killer and Killer was kinda reluctant but when you think about it Computer Paul is a good producer. I remember it was a Sunday we went to Anchor studio and we recorded that Song for Computer Paul but Computer Paul never do nothing much for the song so Killer go voice it over fi Jmmys them. So after that now, that’s how Killer and Kartel start link. Kartel start writing songs. Killer hear more songs with Kartel and so the history start with Kartel and Bounty Killer.”

The relationship between Vybz Kartel and his manager would later crumble after a misunderstanding with payment from a show in the UK. Singerjay Cash Money Sound accompanied Kartel to the UK, and the money provided by the promoter was for everyone; however, Kartel believed the fee was for his performance only. The issues were later supersized with Kartel linking with Roach, with who Butler did not share close ties. Both men did not speak to each other until six months later. Butler explained that he later spoke to Kartel on two other occasions where he expressed that he wanted Butler to be his manager again.

The Atlanta-based businessman explains that other factors at play surround his decision not to manage Vybz Kartel, including his multitude of ‘Yes Men’ affiliates and knack for not always listening or taking his advice.

Concerning Kartel’s long-term stay behind bars, Butler believes the system took a personal vendetta against the deejay from his earlier days when he crafted the song “When Shotta Go Jail” on Akon’s “Locked Up” riddim. He also believes that the high-profile fight between Vybz Kartel and Ninjaman on Sting 2004 also placed a negative light on the deejay.

Rohan Butler and Vybz Kartel cut their professional ties in 2005.