Chris Brown hints he will make an appearance on Donda.

Chris Brown and Kanye West might’ve been cooking, and the results of two of the world’s most talented musicians coming together may be on display on Ye’s highly anticipated Donda album.

Kanye West has been teasing the arrival of his long awaiting Donda album for the past few days. Justin LaBoy broke the news to fans after attending a listening party in Las Vegas with Brooklyn Nets Star Kevin Durant. He followed up with words of a hot collab between Kanye and Lil Baby but spoke nothing about a Chris Brown and Kanye linkup. Follow-up listening parties revealed the likes of Tyler The Creator, Griselda, Travis Scott, Playboi Carti, Post Malone, Baby Keem, and Pusha T.

That has not stopped Chris Brown from injecting his name into the recent happenings. He used his Instagram Story to write “Dat Yeezy and Breez” along with eyeballs emoji. The move doesn’t actually confirm Brown’s inclusion on West’s Donda project, but the timing is pretty convenient. Brown had previously hinted that he would have new music on the way, so it could be that he’s capitalizing on the Kanye craze currently sweeping the world. 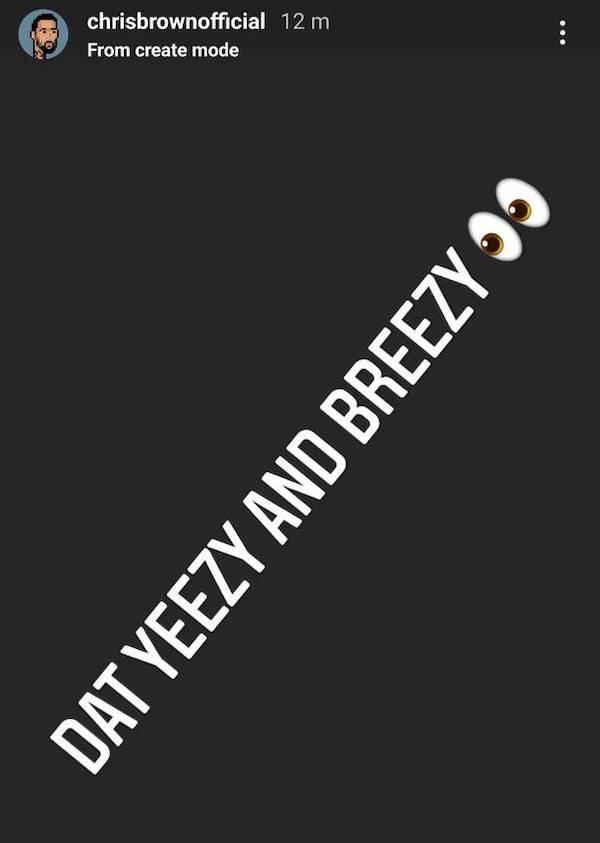 Kanye West and Brown have previously worked on their smash hits “Down” and “Waves.” The latter was released on Kanye’s Life Of Pablo album in 2016. 2018 would mark a deterioration in the friendship between the two after Brown slammed Kanye for his comments about slavery being a choice. They would, however, reconcile, proven by Ye providing Breezy with one of his custom all-terrain tanks.

“THIS MAN IS A CLOWN! OUR SONG JUST WENT PLATINUM BUT F*** THAT! CMON BRUH, and if any flunkies gotta problem,, SEE ME… please! PLEASE BLACK PEOPLE,” Breezy said. “DO NOT FOLLOW THIS N***A ON HIS PATH TO DESTRUCTION! WHATEVER HELP U THINK I NEED…. GET IT FOR HIM ASAP! IMA FAN OF THIS MANS MUSIC SO WHAT HE SAYS IS LISTENED TO AND INTERNALIZED. WAKE THE HELL UP KANYE…. PLEASE. SLAVERY WAS A CHOICE? Whattttttt?”

Kanye West is expected to drop Donda on August 6 after failing to release the project last Friday. The anticipation has already left the “Good Life” rapper trending without him even uttering a word to fans on media.