Rihanna neatly covered her Drake inspired tattoo and thus erasing her final memory of their time together.

The Fenty Beauty mogul is always fashionably put together, but it wasn’t her Dior slip dress that fans were interested in when they saw her photos on Wednesday night but rather the fact that she is sporting some new ink. Or rather a covered-over ink on her leg.

The Anti artist was spotted out with A$AP Rocky for a date night out in Brooklyn, and paparazzi photos show the infamous camo shark tattoo she got to match Drake’s, is now covered up and replaced by a crown ring around her ankle.

It’s obvious that Drake fumbled the bag when it comes to Rihanna, and now that that part of her life is over, fans can’t help but be happy for her as she and A$AP Rocky are in a relationship which he confirmed months ago when he called her “the One.”

Rihanna’s original shark tattoo is a matching Ripley’s aquarium-inspired tattoo that matches one that Drake has on his forearm.

The pair were romantically linked in 2016, particularly as Drake was not shy in showing that he was in love with Rihanna as he introduced her at the 2016 MTV Vanguard Award. 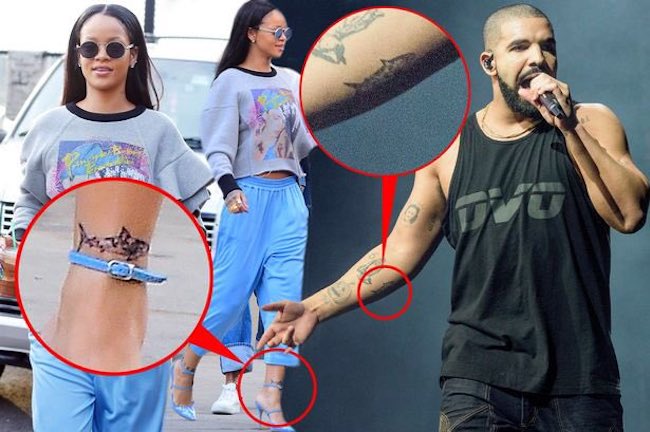 The two appeared to have dated briefly in 2009 after Rihanna ended her relationship with Chris Brown. However, while Drake was open about how he felt about Rihanna, Rihanna always maintained that they were just friends, nothing more.

In spite of this, the two seemed to at least have on-screen chemistry as they have since made music continuously since then. Over the years, the two seemed to have an up and down relationship, with Rihanna once saying they weren’t friends in 2018 in a news interview.

However, it appears that they are on good terms now as Rihanna was recently spotted at Drake’s party last month in LA with her beau A$AP Rocky in tow.

Whao. Rihanna covered her shark tattoo with Drake. She def moves on ? pic.twitter.com/btn0IAXvWB

Drake still has a photo with Rihanna on his Instagram page.