Lil Wayne sat down and chop it up with his protege Nicki Minaj on Queen Radio.

The Queen rapper wasn’t playing when she mentioned that she had a surprise in store for her fans, and she delivered with a virtual Queen Radio experience. There might not be a Nicki Minaj without Lil Wayne, so it’s only fitting that Weezy is on the first episode of the new season of Queen Radio. The two connected on different levels, with Wayne being given his flowers by Nicki and also revealing his favorite sex position and why. He also used the time to clear up the misconception that he had gotten married.

First to the business of music as Nicki Minaj gave Lil Wayne a shoutout for placing number 5 on Complex’s list of Best Rap Verses of 2021 So Far, for his work on “Seeing Green” off Nicki’s Beam Me Up Scotty Mixtape. Sadly, Wayne was not as enthused about the fifth spot as Nicki Minaj.

“That s*cks, What the hell,” he commented, hinting that he should have been number 1.

In keeping with the theme of her Queen Radio, minus the bombs and explosions, Nicki decided to hit Tunechi with a few questions. In relation to her admiration of his recent work, Nicki wanted to know what changes Weezy made that brought back the fire to his verses after being in the business for so long. 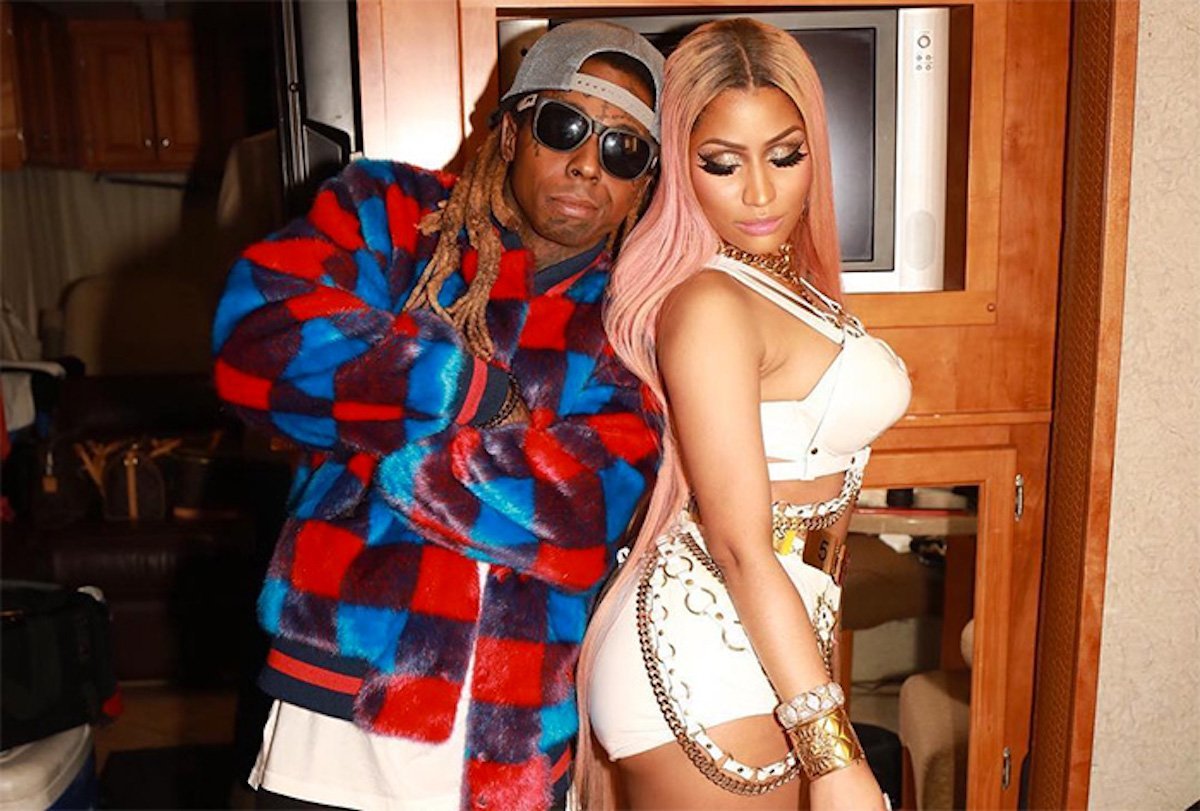 “As for as what am I doing…I think you get used to hearing a certain type of music that we are all accustomed to hearing right now as the times. A song like seeing green and these others… I’ve been taking the approach of whenever I’m getting the opportunity to do a feature, with other artiste I’m approaching it different,” he explained.

“I used to approach it like you would send me a song and whatever your melody is on your song and whatever the bop is on your song, Amma do what you did, hopefully what you was expecting. But then there was a moment when I was doing people features. I was around the time when I did stuff like “Soldier” for Destiny’s Child and stuff like that. I was approaching those songs with just ‘I’m going to be me. I’m going to be the best Wayne. I would sometimes forget the subject of the song and have to remember like boy they talking about soldiers on this song,” he added with a smile.

“I think I started taking that approach again,” he said before his mic cut out.

He picked up right where he left off after reconnecting with his host. He shared, “I’m at a point in my career where I just so thankful for every da*n thing, every single piece, every second of it. So when Mac send me like four features at one time I be so thankful that the person, whoever the person the song for that they consider me. I look at it like a job interview and I need a job.”

Nicki Minaj recalls taking a similar path when it came to features, as she tries not to go too hard and outdo the song’s original creator.

The Trinidadian rapper scored a number of hits in 2020 from her collaborations. She first teamed up with Doja Cat, where she featured on “Say So.” She would go on to remove the featured title as she and Tekashi 6ix9ine worked together on “TROLLZ” for their Billboard Hot 100 Chart-topping record.

Wayne’s place among the greats of hip hop is unquestionable, and Nicki wanted to know just how the New Orleans native felt about inspiring a whole generation of rappers.

“The Absolute Best,” he mouthed while rolling his spliff.

Nicki decided to pull one question from the rumor mill to toss at Wayne concerning a tweet that left everyone thinking Wayne had gotten married.

“No I did not get married. First of all, I said The Carters. Girl, that’s my damn sons’ lil name of their lil group. They were too upset so they added Boyz to their sh*t so now they’re The Carter Boyz,” Wayne explained about his 11 and 12-year-olds who have started rapping against each other. Lil Wayne has been linked to Denise Bidot since the early part of 2020. However, it has not been smooth sailing for the couple who have called it quits on a number of occasions.

Happiest man alive! Today is the beginning of our forever. Forever?? Forever, ever?? FOREVER EVER!!!!! The Carters.

It would have been unlike Nicki Minaj to end the conversation with Lil Wayne without getting some juicy info about his personal life, which presumably led to her question about the rapper’s favorite position during sex.

“On top in like any part of life period. Not just the bedroom, just on top,” he said before explaining the reason behind his preference while blowing out the candles on Nicki’s comment about foot/toe fetish. 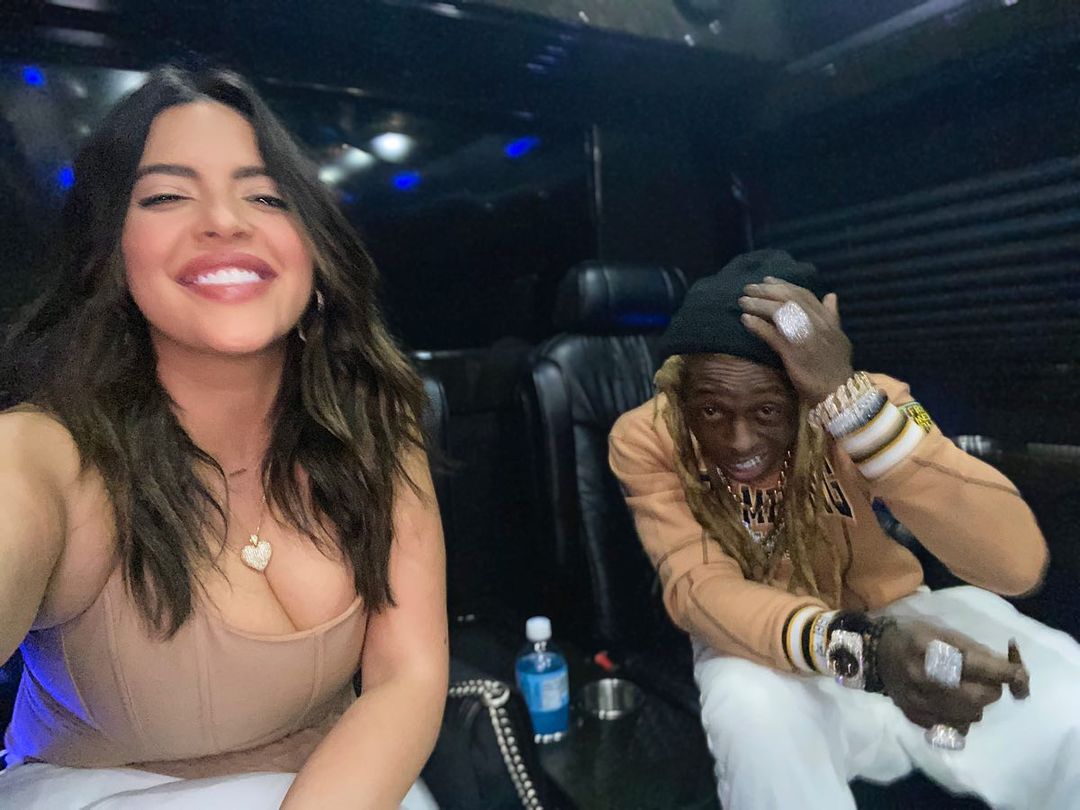 “I like women just lay down and look up and look at me just to see the power that she has over me at such a moment. So a woman can be like damn I’m just laying here, I ain’t humping back, I ain’t doing nothing and you feeling like this, I’m a powerful motherf**ker. I just want a woman to know the power she have,” he concluded with a smile.

Wayne had just enough time to share a video of an 8-year-old actress, fashion blogger, and philanthropist Taylen Biggs. Wayne explained that they both were kicking it on a playdate earlier when they did the video shouting out Minaj.

Nicki’s shenanigans would continue throughout her IG Live when she invited her surprise guest BIA in front of the camera to announce the release of the remix of BIA’s “Whole Lotta Money.” The games continued with Nicki and BIA playing a game of Marry, F**k, Kill. Sadly, the likes of Future and DaBaby got the ax, while Drake and Lil Durk got the rings upfront. Chris Brown and Young Thug were assigned the roles of designated bedroom pleasers.