These days Tekashi 6ix9ine might be off of the live videos, but he’s following the news as he keeps up with the happenings involving his sworn enemies in the rap industry.

6ix9ine has been unleashing his bitter commentary against those he dislikes as he takes time out of his busy days to drop in on the comment sections to let his views be known.

Tekashi 6ix9ine has been relatively quiet since his baited beef with Meek Mill months ago, but it seems that he’s trying to stay relevant since his latest project TattleTales didn’t make much of an impact.

The rapper has now taken to unleash his anger at other rappers across social media.

Among those that 6ix9ine took aim at in recent months includes Lil Durk and members of his entourage- recently leaving nasty and insensitive comments about Durk’s big brother after being shot and killed, as well as his producer, leaving insensitive comments about late rapper King Von, and even attempting to troll New York rapper Bobby Shmurda who has hinted that he might be signing to Roc Nation.

Shmurda posted selfie videos of him at Roc Nation headquarters, which seemed to cement his move to the label which is owned by rap mogul Jay-Z. However, 6ix9ine took issue with Shmurda’s post, particularly since the rapper has been outspoken against snitching, something fans and others in the industry dislike 6ix9ine for regarding his last case after he apparently “snitched” on quite a few people so he can get off on a lighter sentence.

“They hate ratting and cooperating with police but SIGN to roc nation (Who’s CEO is a cooperating federal informant for the DEA) but pick and choose,” wrote 6ix9ine in response to the video reposted by DJ Akademiks on Instagram.

The New York rapper is not referring to Jay-Z but rather one of the co-founders – Desiree Perez, who was appointed CEO in 2019 and currently serves in that capacity.

However, she received a presidential pardon from Donald Trump last year for a 1990s drug conspiracy case which included charges for drugs, firearm, and grand larceny.

However, according to news reports, there’s no credible report that he actually cooperated with the DEA. 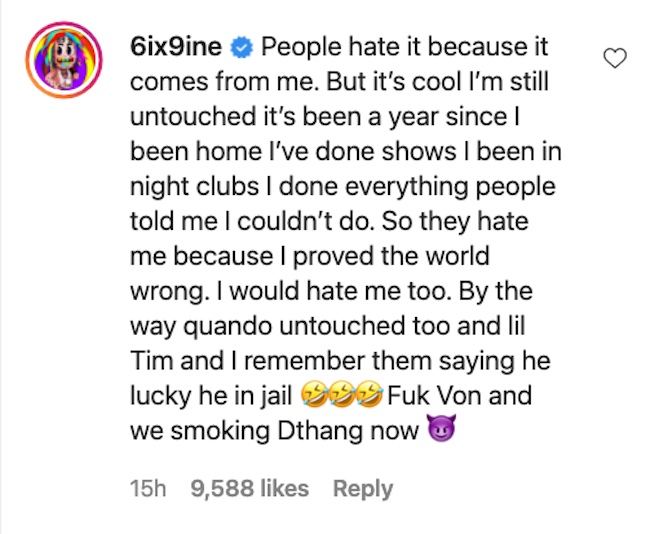 6ix9ine inflicted further damage as he said, “People hate it because it comes from me. But it’s cool I’m still untouched it’s been a year since I been home I’ve done shows I been in night clubs I done everything people told me I couldn’t do. So they hate me because I proved the world wrong. I would hate me too. By the way quando untouched too and lil Tim and I remember them saying he lucky he in jail [three laughing emojis.] Fuk Von and we smoking Dthang now.” He added with the devil face emoji.