Proving once again that he is nothing but a clout-chasing troll, Tekashi 6ix9ine hit a new low this week when he mocked Lil Durk and made light of the death of the Chicago rapper’s brother. Durk’s brother, DThang, was reportedly gunned down outside a club on Saturday at the age of 32.

Durk is, of course, still in mourning, and many friends and acquaintances have come forward to send their deepest sympathies and condolences to Durk and his family. However, never one to miss an opportunity to troll, 6ix9ine decided to kick his rival while he is down with a disrespectful comment on DJ Akademiks’ Instagram post.

“@lildurk tell the truth about yo Gang man they really dyin,” Tekashi chimed in on a post announcing the shooting, adding several laughing emojis to an already menacing comment. The notorious snitch didn’t stop there but instead began leaving a series of comments on several posts, including one on Durk’s merch promotion post, where he said, “Your brother just died and you want to sell sweaters”, again with several laughing emojis. 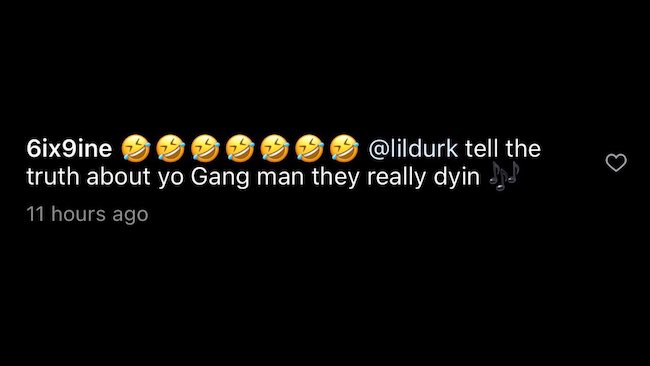 Doubling down on the disrespect, 6ix9ine also brought up the death of Lil Durk’s affiliate King Von, saying, “Time to smoke a pack…it’s like every week..didn’t even finish enjoying smoking Von yet..YAL dying to fast”.

Trolling Lil Durk is nothing new for Tekashi, who always jumps at the chance to stir up drama on social media, even in the aftermath of a tragedy. However, after some back and forth disses between the two rappers, Lil Durk announced earlier this year that he was done entertaining 6ix9ine’s brand of beef. He also claimed that Tekashi’s team offered to pay him $3 million to continue the feud, an accusation that seems plausible considering how desperate 6ix9ine is to hold on to fame.