Yaya Mayweather is showing her baby daddy NBA YoungBoy some love with a pair of custom baby Crocs.

The Baton Rouge rapper is in a difficult situation behind bars and could face as much as ten years in prison. Even though he’s staring down a barrel of legal woes, he still has some support. Yaya Mayweather, Floyd Mayweather‘s daughter, and YoungBoy Never Broke Again’s baby mother, took to Instagram to show her support for the troubled artist. She posted a pic showing off a custom pair of Crocs which included a huge depiction of YoungBoy’s face.

The pic was posted to her stories. In the image, NBA YoungBoy is adorned with a roll of cash and a gun on one side of the crocs. The other has an image of Cheetos and the Gucci emblem. The “Make No Sense Rapper” dropped an emotional track today called “Territorial”. The single is a prelude to his highly anticipated album Sincerely, Kentrell.

According to reports, he’s been able to dodge a devastating RICO charge, but he still faces the very real probability of spending some time behind bars after being arrested last month. He was arrested after fleeing from LAPD officers during an attempted traffic stop on an outstanding warrant. 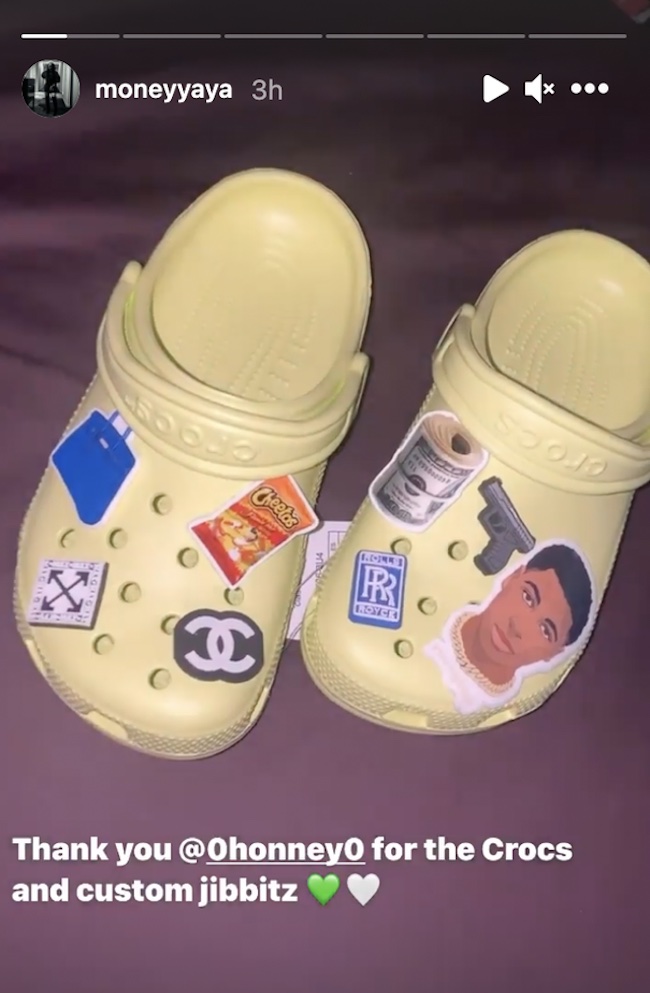 The 21-year-old rapper, whose real name is Kentrell DeSean Gaulden, was eventually caught after a K-9 unit was brought in to track him down. Other reports indicated that LAPD officers found a firearm in his vehicle, but it was never clarified if it was his weapon.

The custom pair of Crocs that Yaya chose to show her support was created by Instagram user @0honney0. She’s made many so far, which also feature NBA Youngboy’s likeness. Yaya and NBA trended on social media after a bitter breakup, but it seems that she still has love for him. Their relationship is definitely done as he’s since moved on and is in a relationship with his on-again-off-again girlfriend, Jazlyn Mychelle.