Vybz Kartel is reminding his critics that he has been a Billboard artist long before his 2009 hit, “Romping Shop” featuring Spice.

The dancehall icon pushed back at a local blogger who insinuated that younger artists were making Billboard hits as if it was a new phenomenon. Vybz Kartel took to Instagram via his official account to school YouTube blogger BrandO of BrandO Music Review Show as he asserted that he had been a Billboard Superstar even way before the advent of social media.

In a screenshot posted, Kartel pointed out that his song “Tekk” peaked at #11 on the Billboard Hot R&B/ Hip Hop Songs chart in September of 2004. A month later that year, in October, his song “Picture This” peaked at #21, while his hit single “Ramping Shop,” which featured Spice peaked at #2 in July 2009.

The artiste noted in commentary regarding his achievements that “a simple ting fam. Member me a Star long before my space, bootube [sic], ig, facebook & twitter,” he began.. “since most a unnu a go infant school school…suh nuff ting dem ago THINK dem 1st dweet.”

Brando Music apologized for his faux pas that set off “Di Teacha.” “Let me apologize for misinforming my audience during the interview with non-nice recently and in previous reviews @vybzkartel has been on @billboard charts long before 2009 Romping Shop entry featuring Spice,” he said. 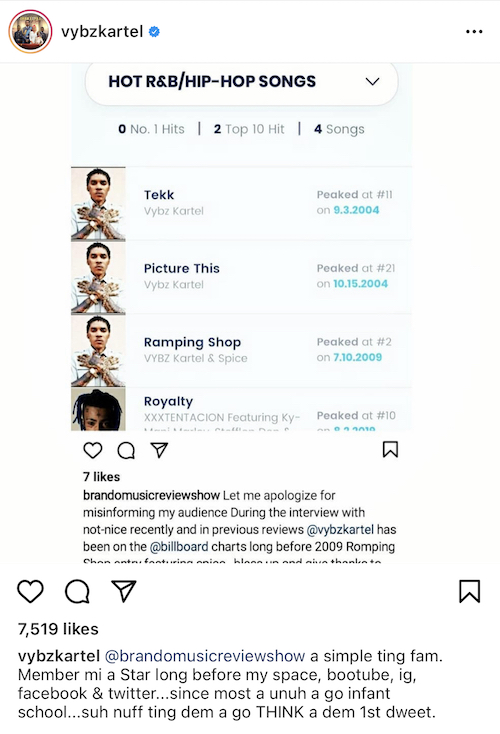 Vybz Kartel has long been a lyrical genius destined for greatness. He released his first single at the age of 12 years old – “Love Fat woman” under his first stage name ‘Adi Banton’, and as the years rolled on, he engaged the music world as Bounty Killer’s protégé, so by the time he broke out as a solo artist in 2002 with hits like “Guns Like Mine,” “Badman” and “Most High,” the artiste’s potential was established.

His songs have charted on everything from Reggae to R&B and Hip Hop, but by far, his influence and popularity as an artist in Jamaica, the Caribbean, and the diaspora grew wide. It was driven mainly by CDs and DVDs and radio play, and large sold-out shows that the artiste performed at around the world. At the time, social media platforms had little scope as it does in the current decade.

Kartel’s likability came from his persona, his incisive lyrics, and no doubt his songs which connected with fans. Along with “Romping Shop,” his song “Dollar sign,” also released in 2009, was in regular rotation on urban radio stations in the United States.

By 2010, his hit single “Clarks” became among his biggest international successes. When the song dropped, it was in the top three reggae singles gaining the most radio plays in North America for 40 weeks straight. “Clarks” was so big that it also featured “So you think you can dance Canada” and it featured on a CNN segment on dancehall dance follow-ups to “Clarks,” – “Clarks Clarks-2 again” and “Clarks 3 wear Weh yuh” placed the British footwear brand back on the map as the shoes soared in popularity.

Here’s  a list of songs from Vybz Kartel that charted up to 2012 on the US R&B Chart and the UK Reggae Chart.

In spite of his singles hitting various charts, Kartel also recorded numerous album successes between 2009 and 2016.

Kartel’s Billboard album Hits history began in 2011 with Kingston Story. That song debuted at No. 7 on July 9 and sold over 1,000 copies in the first week. This was among Kartel’s first sets of digital albums as he crossed over into the digital space of music streaming. A different edition of the album also debuted on the Billboard Hot 100 at No.13 in 2012.

The album “’Vybz Kartel Roots & Culture: The Voice of the Jamaican Ghetto” hit No. 6 on the charts on July 27, 2013, followed by “Kartel Forever: Trilogy”, which peaked at No. 11 after landing on the chart on June 21, 2014. Less than 1,000 copies were sold in that first week. He also released “Reggae Love Songs & Other Things” that entered the chart peaking at No. 7.

In his first interview since being behind bars for four years, Vybz Kartel speaking to Billboard about his continued dominance from jail, Kartel said he remains committed to making music, and his formula sets him apart.

“It’s a secret like the Colonel’s recipe. The true secret to success is commitment, hard work, smart work, self-analysis and most important, humility,” he responded. “Once I face a riddim (rhythm track), I’m not worldboss, just a man with a pen, paper and a track. Other artists are working hard, so I think it’s just the formula.”

An unverified account of the artiste’s songs shows that he has recorded 694 songs since his career started.

His song “Fever” from his 2016 album King of the Dancehall was certified gold by the Recording Industry Association of America. The song peaked No. 2 on the Billboard Reggae Albums Charts and has been viewed 43 million times on YouTube.

Among those who have received similar awards are a select few, which include the likes of Sean Paul, Buju Banton, Kranium, and Mad Cobra.

Since then, he has released hundreds of songs and several albums as he aims to snag the top awards. In the previous commentary, the artiste rubbished YouTube views as a mark of achievement for dancehall artists, as he noted that streaming numbers on paid platforms were much better measures of success.

Despite that, Kartel continues to dominate. Up to 2020, Vybz Kartel had the most views on YouTube with 6.2 million views, leading the likes of newcomer Skillibeng with 6.0 million views and Alkaline with 5.22 million and Chronic Law rounding off the top five with 4.3 million views.