Chronixx is letting Popcaan know that he rates him, and he has shared his appreciation for the Unruly artist’s style in a post on Instagram.

It’s not the first time that Chronixx is praising the OVO artist, and he has in the past acknowledged Popcaan’s contribution to music. In August 2020, Chronixx and Protoje heaped praise on Popcaan and called him a giant and a great ambassador of Jamaica music.

Popcaan is known more as a superstar with global appeal as his music is greatly consumed outside of Jamaica, far more than it is locally. His projects like Fixtape which debuted No. 1 on the iTunes Reggae Chart, dethroning Bob Marley’s Legend is just one of the artist’s latest achievements.

Chronixx on Monday said on his Instagram Stories, “Popcaan have the craziest melodies in Jamaican music industry…I don’t understand where in the cosmos those arrangements of notes are coming from. Honestly,” Chronixx wrote. What ever [sic] you tune into bro…stay in tune wid dat!!! Melody and harmony is everything” he added. 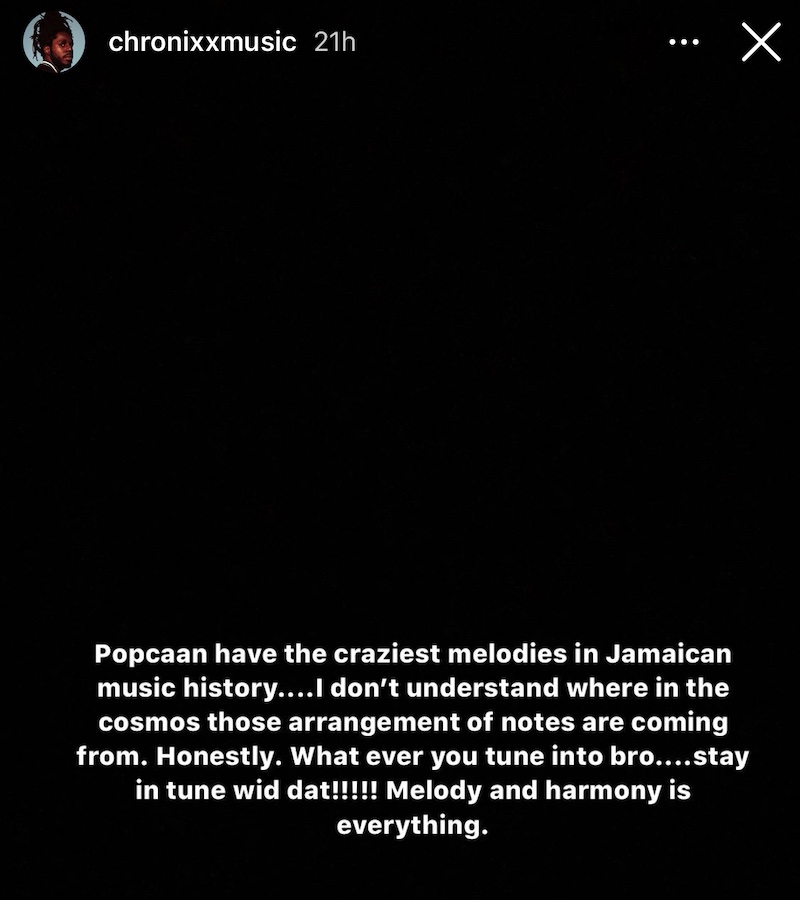 The former Grammy nominee also added an emoji of the mountain goat, an allegory for the acronym – G.O.A.T (greatest of all time).

Meanwhile, Chronixx was very receptive of the compliment as he re-shared the story to his own Instagram Stories with the comment, “@Chronixxmusic blessings Chrondada, me a play the harp wid melody like david.”

Poppy is reeling in the success of his latest project, Gyalentine, released for Valentine’s Day 2021 produced by Unruly Entertainment and distributed by Zojak World Wide.

Popcaan also recently released his song “Medal”. The song has recorded 115k views within 22 hours after dropping. It’s another motivational banger with the signature style of Popcaan. One thing about Popcaan he knows how to make songs with longevity as this song is a self-motivating anthem that will be on regular rotation of fans.