Jamaica’s Prime Minister Andrew Holness has just introduced a new series of stricter COVID-19 measures in a bid to curb the escalation of cases across the island. The new measures which were announced on Sunday have left quite a few persons baffled as to what’s next. As such, there has been public outcry since the announcement of “too little, too late,” with some calling the measures “draconian” and alluding to the Prime Minister being a “Hitler” in their lives.

A few have also noted that with these new measures, it would be better to close the country while reminding their fellow countrymen they are the cause of these new measures as they have failed to adhere to previous protocols put in place.

The entertainment industry has been very hard hit in the past year or so since the country announced its first Covid case. As a result, quite a few artists have come out to voice their opinions and give their grouses on how the pandemic has been affecting them, especially with stricter measures been implemented by the government. The latest artiste to add his voice to the outcry about these new Covid-19 measures is veteran dancehall artiste Bounty Killer.

In a post shared via his official Instagram page last night, the “Warlord” questioned why the government had not closed the nation’s ports. He suggested they close the ports as a measure to curb COVID-19. Killer said, “simple unuh putting unuh livelihood over the ppl lives simple bcuz letting in Covid then lock it down is not a cure lock it out for a few months and then let’s fights what’s here is the only way to try curb or reduce the cases done talk.”

“Without life livelihood has no use to a dead person so which is more important at the appointed moment Lives or Livelihood,” Bounty added. 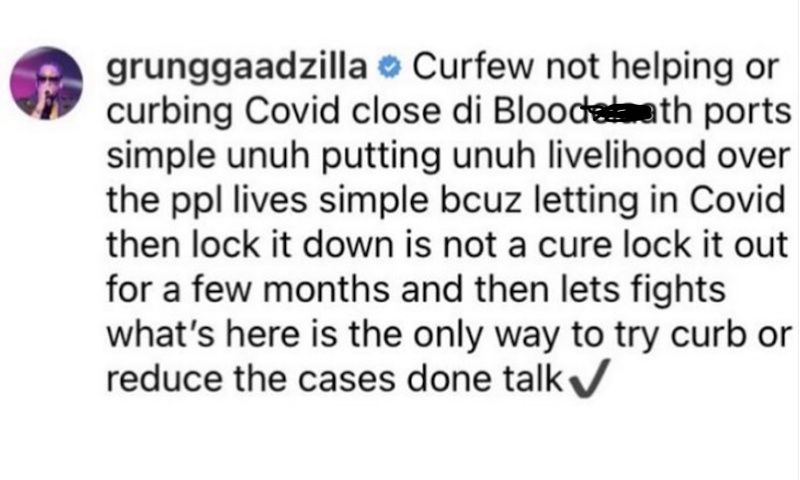 Bounty Killer joins a host of other artists, including Spragga Benz and Buju Banton, who for months now have been speaking about the measures imposed by the government. It was just a week ago Buju Banton too hit out at the government in a short but profound video clip that went viral where he accused them of being “oppressive “and their methods being akin to “tyranny.”

Earlier today, Buju Banton again released a new video clip in a very somber-sounding voice. He implored Jamaicans to pray and take back their power. Addressing his fans, he said, “Do you get it now pray, go back to God the true and living almighty God do you see it now can you feel it now. Wake up let’s take back our power as a people.” The once incarcerated entertainer then used a well-known biblical analogy to explain that tougher times awaited those who did not heed his warning. “JUST LIKE IN THE DAYS OF NOAH,” he wrote in the caption below the post.

The Gargamel has been using his platform to mount fire against the leaders of Jamaica since the onset of Covid-19. His recent public address is of a different vibe from his normal “fiery” decry, and it immediately drew the attention of his followers. The comments below the post were divided, with a few hailing him as a modern-day prophet, while others questioned his sanity.

Some of the new measures announced by the government of Jamaica include tighter curfew hours for selected days, with a more stringent approach of a complete shutdown reserved for Easter Holidays. The holiday weekend will see a strict curfew running from Saturday, April 3 at 12 noon to 5 AM on Tuesday, April 6. Business places have been relegated to a 12-noon lockup for Friday, March 26, April 1, and April 9. There will also be no face-to-face schooling until April 13.

The gathering limit remains at ten people, and weddings will be cut from twenty-five to fifteen persons. Funerals are still prohibited. However, burials not exceeding 30 minutes will resume after March 23. Jamaica’s are known for their comedic spirits, and as such, numerous memes have already taken hold of Jamaican Twitter. While citizens continue to use humor to combat what should be a very tough couple of weeks, the country’s death toll from Covid-19 cases continues to rise; clocking in over 500 deaths thus far.