It seems the news about Jennifer Lopez’s break up with Alex Rodriguez is also hitting her children as the singer and actress shared a rare and personal image of her daughter being comforted by her father Marc Anthony as she cried.

The news flooded social media on Friday afternoon that “J-Rod”- the nickname which the couple received, was no more as a source confirmed that they had broken up even as rumors swirled that Rodriguez might have possibly cheated or attempted to cheat with a young reality star.

While neither of the two have addressed the news report about the split, J.Lo seems to be sharing how the news is affecting her daughter.

In a post made on her Instagram story, J.Lo posted what looked like a screenshot from a video call with her daughter and Marc Anthony in which her daughter cries as she leans on her father’s shoulders. She said, “When they are sad but momma and daddy are there #Coconuts,” she wrote over the screengrab. “I love you. So proud of You…” she said.

In the image, her daughter is seen emotional as she appears to be crying while her father clasps his fingers with hers and allows her to lean on him. J.Lo, on the other hand, looks far from a person going through a breakup as she appears stunning with her skin clean and glowing and her hair tied up in a ponytail.

In previous news reports, J.Lo has said she loves how A-Rod is with her kids as they shared a good bond. The couple has been together four years prior to breaking up, which means her children have spent a better part of their childhood growing up with A-Rod. 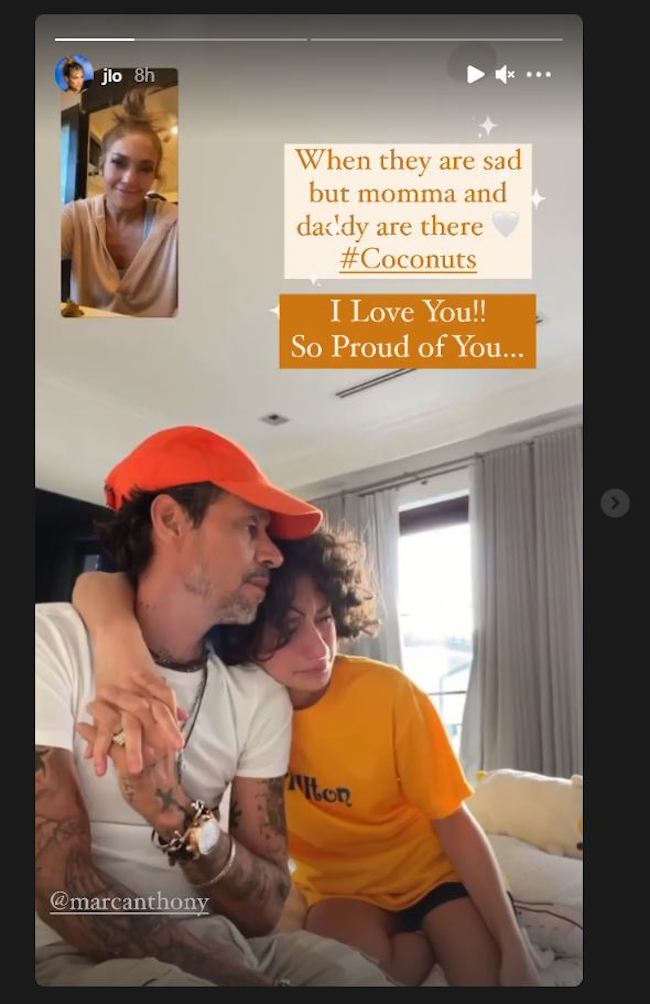 J.Lo is presently in the Dominican Republic as she films her upcoming movie “Shotgun Wedding.” At the same time, A-Rod has announced his presence being in Miami as he enjoyed a boat ride on a yacht earlier on Friday.

The couple postponed their wedding twice over the last year, with them saying it was due to the Covid-19 pandemic. J.Lo has been married three times prior )Ojani Noa, Cris Judd, and Marc Anthony, who she shares 13 years old twins yet). She’s also been engaged before to Ben Affleck before calling off the wedding.

Meanwhile, Rodriguez has two kids from his previous marriage to Cynthia Scurtis.