Vybz Kartel and Aidonia have been beefing for years and are unlikely to make peace anytime soon.

Over the years, fans have continually been entertained by dancehall and the many clashes that have emerged. Some have been short-lived and resolved definitively. Others have endured and kept going. Dancehall veterans Beenie Man and Bounty Killer were once sworn enemies and now are close friends. Very little can ever be mentioned in dancehall without bringing up Vybz Kartel’s name. He’s dominated the genre for the better part of two decades, and in that time, he’s also had his share of feuds. Due to his lyrical skill, many have been quashed in no time. While many fans know about his ongoing disdain for Mavado, they may have forgotten his ongoing war with Aidonia has a deep past. This feud goes way back to the 2000s and ignited in the 2010s. For long periods of time, both artistes have nothing to say to each other, and then they reignite the war and trade blows.

The two dancehall heavy weights started taking shots at each other after Vybz Kartel left The Alliance in 2003 following a heated argument with leader Bounty Killer over creative differences. Soon after, Aidonia also split from the group, which is now predominately led by Mavado’s Gully Squad. Kartel went on to form Portmore Empire, also known as the Gaza Empire, which quickly became a household name in dancehall locally and overseas. It was during this time, in the mid-2000s, that he and Aidonia began drifting further apart, and verbal shots continued to being fired. Even though the two took shots at each other back and forth, it would be Aidonia who would call out Kartel in 2011. While their songs always had elements of shade, in an interview on YouTube, Aidonia lit the match when he questioned Kartel’s lyrical ability.

Aidonia, who at the time was surrounded by other JOP members, said, “Kartel nuh have no lyrics, yuh turn singer. If yuh seh yuh a di baddest artiste just defend dis. When da interview ya drop mi a give him three days fi ansa and mi nah talk ansa pon no interview, ansa inna song.”

He added, “If three days pass and yuh nuh seh nutten, di world know seh Kartel a coward. Put it inna music and come sort it out and show di people dem seh yuh a nuh fool. Yuh only a gwaan like yuh bad and yuh a di biggest informer bout ya.”

He also admitted that “Nuh Par Wid” and “Nuh Tek Chat” were directed at the Gaza boss. Aidonia also confidently stated that he could take on Kartel and win. “Mi a di baddest thing musically. Mi will mek him sing 10 song and use one and kill him,” Aidonia said.

The video surfaced after Vybz Kartel did an interview on MTV in which he said Aidonia was a broke, hungry, confused child and a drowning man grabbing at straws. That was enough to get Aidonia irate, and in the above-mentioned video, he shot back.

“Kartel a coward. Him fi tell di people dem seh him fraid a Aidonia. From mi buss mi seh JOP. Him neva confused when him seh Bounty a him fada? Yuh come back and diss Bounty Killer. Yuh neva confused or yuh nuh memba? Mi nuh confused, mi know weh mi a do, a JOP mi seh,” he said. He claimed that Kartel was lying about his assets and was in no way a “’dancehall hero.”

He added, “Bout yuh a dancehall hero. Super hero wear brief and tights and dem thing deh … Wi a bad people. You a follow. Yuh a di biggest pirate, tek people things and turn it your way and try mek it look original. When wi a beat Clarks inna di ghetto, a some big Jordan and some jersey and some big hat yuh a wear. Weh unuh know bout grabba? A unuh a follower, wi a di leader,” Aidonia said.

It was a shot at an artiste that was dominating, and Vybz Kartel took a while to respond. When questioned on it by the Jamaica Star at the time, he responded in typical Worl’Boss fashion, “sorry don’t discuss artistes. I’m too busy making millions.” it was the first time that Aidonia officially called out Kartel. Aidonia would go on to release several songs that fans suspected were aimed at Kartel, but he never confirmed this, and so the beef remained a cold war until those two interviews. It’s also important to note that they were once very close, and Aidonia has admitted in the past that Kartel was sort of a mentor to him. The two even shared a fast-paced, gritty single called “Deadly Alliance” back in 2006 that highlighted how well their styles worked together.

Vybz Kartel couldn’t resist and hit back with just as violent lyrics in “Do Weh Yuh Wah Fi Do.” An irritated Kartel said he could stand up to anyone, anywhere, and at any time. “Go tell dem remember, seh mi nuh fraid a nobo-nobody, mi have it, and anyweh mi a go, mi carry it and when it start, nobody cyan tell mi sorry, mi a dweet in front of everybody, yuh see di corolla and think seh a cabbi, a Addi wi give u supm fi deal wid u shabbi.”

Fans would remain divided about who won this battle, with both deejays putting out solid diss tracks. They would continue to take jabs on and off at each other. In 2015, a heavyweight and mentor to both men would weigh in. Bounty Killer declared that Aidonia was the better of both deejays. In an interview, he said, “Kartel and Aidonia similar on that level vocabulary wise and lyrically. He added, “Aidonia can deejay better than Kartel.” Aidonia graciously accepted the title.

“It’s a great feeling for Bounty Killer to say that because everybody know that Bounty Killer is my artist. That is the person who inspired me and motivated me to become a deejay and if him can look at me and tell me that I can deejay those ways then it’s a great vibe and a great feeling… It’s a big talk and it shows that he is listening to Aidonia and it shows that I’ve grown over the years,” he said. Gaza fans vehemently disagreed, but this one blew over as by then Kartel was behind bars. Flash forward to 2019, and Kartel showed that he had not forgotten the claims which seemed to hurt him since it came from his own mentor Bounty Killer.

Soon after Aidonia released “Aircraft,” Vybz Kartel took to Instagram to question how Donia could be at the top of dancehall when Kartel had won deejay of the year at the Youth View Awards and, according to him, had 119 number one singles to Aidonia’s 10. That was the spark that called the generals back out to war.

In 2020, Aidonia used Kartel’s incarceration to score some points, even though he seemed to be genuinely concerned. Referring to Kartel’s mental state behind bars, he said, “Big and serious…someone needs to check on Vybz Kartel mental health…put this man on suicide watch…this is not the vybz kartel we know…the war angel the world boss bickering on the internet over numbers…when the world has crowned this man one of the greatest in dancehall…someone needs to check and see if he has his phone…all this posting is it vybz kartel or post malone.” 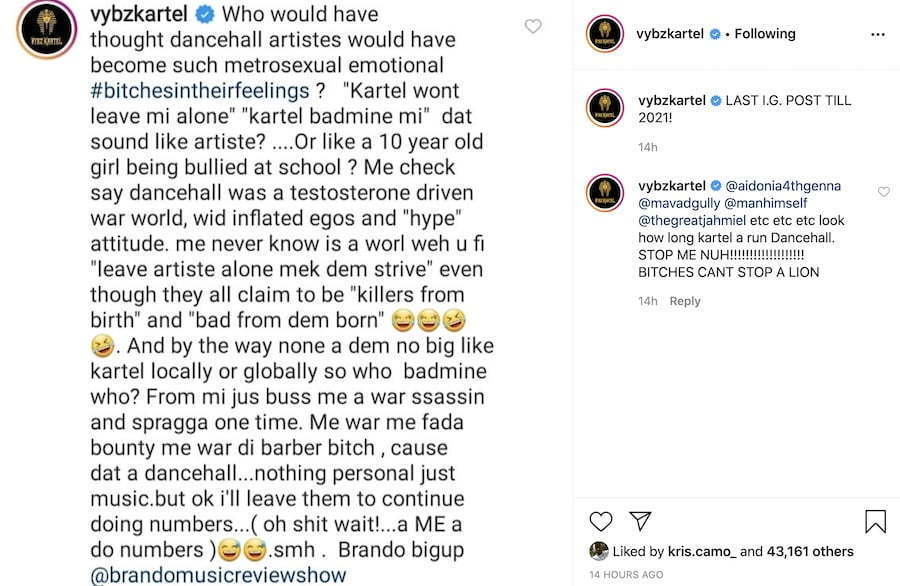 Vybz Kartel did not take kindly to that comment and hit back via Instagram. “Who would have thought that dancehall artist would have become such metrosexual emotional #b*tchesintheirfeelings? Look how long Kartel a run dancehall. Stop me nuh! B*tches can’t stop a lion. He added, “Ya talk bout man fi try stop u …explain how …me woulda pay u 10mil right now fi a man tell me how…if prison neva stop u how mankind fi stop u…u unstoppable dawg…ya war with bay youth who idolize and look up to u a joke ting dat….ya close to 50 so ya war wid u grand kids.”

Aidonia seemingly reminded Kartel that he had given him respect a long time ago when he sang “Addi A Mi Daddy,” but not being one to back down, he added, “P.s Right now mi gone lay dung side a mi WIFE…”

Of course, knowing the history between the two, it hasn’t ended. Just as 2021 began, Kartel once again took a shot at Aidonia, this time though it was more subliminal. He used a widely circulated story that hasn’t yet been proven to be true as his fuel as he accused Aidonia of claiming to be a mega-star but also facing eviction from his family mansion in Kingston & St. Andrew. At the time, the story alleged that the family was being kicked out for failure to pay rental fees. Aidonia wasted no time in responding on Instagram with “Me live inna dem brain RENT FREE!!!” while debuting a track called “Dat Easy.”

That may be enough for Vybz Kartel to fire some shots through a track, but he hasn’t said anything more since he might be focusing on his upcoming appeal at the Privy Council, hoping to reduce his sentence. The way the two go at it, this may turn into one of dancehall’s longest and most entertaining feuds. Only time will tell.