DaniLeigh’s relationship with DaBaby continues to influence public perception of her.

The duo behind “Levi High” maybe going strong with their romance, even making it “Insta official,” but that doesn’t mean that they haven’t been faced with backlash from fans and others. When the pair first got together earlier this year, their relationship was shrouded in accusations of cheating after DaBaby’s baby mama entered the fray. MeMe’s claims about DaniLeigh led to the “Dominican Mami” singer being labeled a homewrecker, with her even telling fans following their break-up that DaBaby had appeared to be single.

Although the “BOP” rapper and the California artist are back together and showing off their love on social media, MeMe has continued to throw shade their way, posting IG Stories like, “I DON’T post him, I be with him in real life,” that insinuate that she still has something going on with the father of her children. That was made even more confusing by the fact that MeMe joined DaBaby at Offset’s recent birthday party.

While her boo hangs out with his baby mama, DaniLeigh has lamented the fact that she has become public enemy number one. The 25-year-old posted a video of herself dancing while DaBaby grabs her blonde curls. 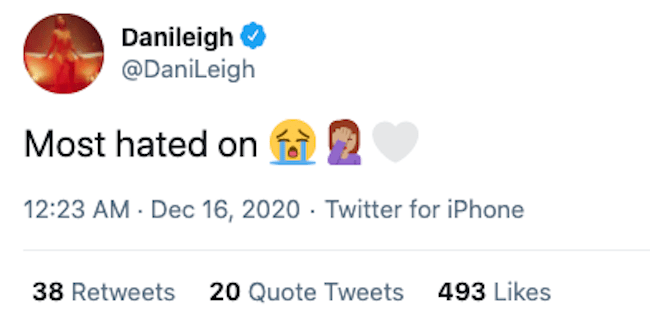 Those who watched felt that Dani actually wanted the Charlotte native to let go, while one predicted that a nasty break-up is in their future. Following all the comments, Dani tweeted, “Most hated on,” implying, perhaps, that she’s getting a bit tired of all the negativity coming her way as a result of her love life.