DaBaby and DaniLeigh continues to flirt on IG while responding to his baby mama MeMe.

The love triangle between DaBaby, Meme, and DaniLeigh is apparently still a thing as the baby mama and girlfriend seemingly exchange subliminal shots on social media. Earlier this year, when things unraveled between Def Jam singer DaniLeigh and Charlotte rapper DaBaby, Meme, the rapper’s baby mama was allegedly still in the picture. Since then, fans have pegged DaBaby as the guy who always goes back to his ex, and while some encouraged DaniLeigh to stay away from that toxicity, others called her a homewrecker.

Wherever you land on the spectrum, it really didn’t matter at the end of the day because DaniLeigh and DaBaby are back together, and they want the world to know it. The problem is, his baby mama isn’t letting up, and Dani may just be petty enough to play. The Dominican princess posted a photo on her IG and the Charlotte hitmaker couldn’t help but drop a comment on it. 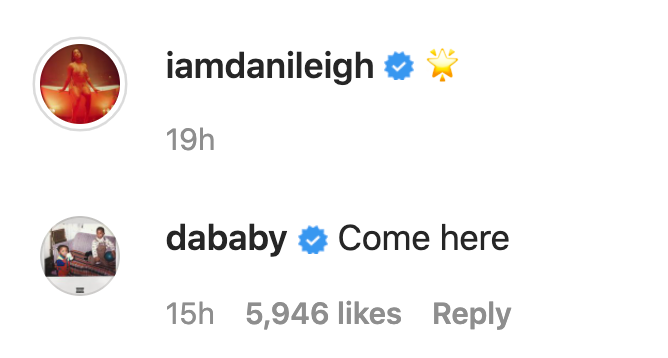 “Come here,” he wrote in the comments while she responded by dropping a running emoji.

DaBaby and DaniLeigh have been dropping hints that they rekindled for months now in their music and on social media. Then just last night, they confirmed their romance by posting each other on Instagram, quelling the speculation once and for all. It seemed like Deja Vu to fans when DaBaby’s daughter’s mom Meme took to Instagram stories almost immediately afterward to post a close-up selfie of her and DaBaby.

Soon enough, Meme started to speak out on social media. “I got the say so I called a quits,” she quoted in her Instagram story. “I prepare y’all for everything lol. Don’t let this sh*t go over your heads.” DaniLeigh may have caught wind of the remarks because fans suspect that her next post was a shot at Meme. The singer posted another photo of her and DaBaby with the rapper flipping the bird twofold. The picture was from the same set as the one Dani posted to her Instagram page earlier calling the rapper “My baby” but the pose may be the deliberate difference.

Do you think DaniLeigh and DaBaby going public with their relationship just means more public spats between the rapper’s BM and GF?