SZA unfollows Drake on Instagram after he claimed they dated over a decade ago.

Drake’s latest kiss and tell has not gone over well with the lady in question as singer SZA cuts ties with the Six God on social media. The internet blew up in a frenzy last night after rapper 21 Savage and Metro Boomin dropped off their new album. However, fans aren’t going crazy over the entire compilation but one specific song in question, that being “Mr. Right Now.” The track, which features OVO boss Drake put fans onto a little secret of his, which you can say was unexpected at the very least. During the verse, Drake raps, “Yeah, said she wanna f**k to some SZA, wait/’Cause I used to date SZA back in ’08.”

The mindblowing tidbit of information was not well received on neither SZA nor their fans’ part as many had absolutely no clue that the pair had ever had any type of romantic coupling. One prominent reason fans are so disturbed by the revelation is Drake’s and SZA’s age at the time they reportedly dated. Back in 2008, Drake would have been about 21 to 22 years old and SZA about 17 or 18. Fans are using this to strengthen their position that Drake likes them young. Others have gone on to mention SZA’s sexuality as well as dubbing her as promiscuous. 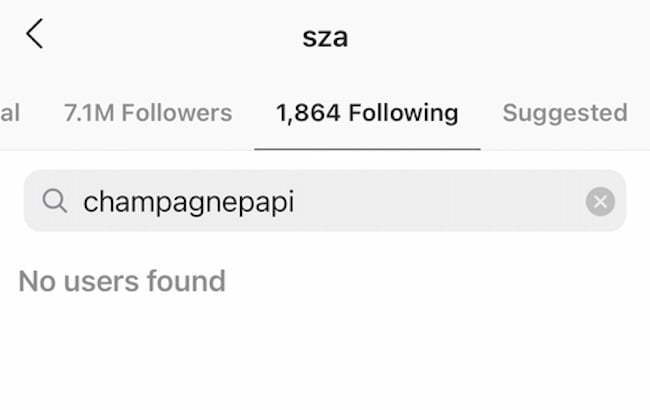 Well, it appears that Drake’s admission did not sit well with the TDE songstress, who has apparently taken to social media to voice her concerns and lash out at the details shared. According to Bossip, SZA has unfollowed Drake on Instagram, which in this day and age is equivalent to a straight-up diss. It is worth noting, however, that he still follows her. We guess love is lost on only one side of the playing field. As Drake says, “if you cool with it, baby, she can still play.”

SZA also took things a bit further, posting a popular meme on her Instagram Story. During the clip, the subject beckons to a bystander and screams, “Excuse me! You’re in my business. Yeah, don’t do that.”

We get the message SZA, let’s just hope Drake does too.