Meek Mill is worried about his own family selling him out for clout.

Fame can be great, but it can also be toxic. Though many people adjust to their relative or close friend’s stardom, unfortunately, there are still those who simply cannot. Meek Mill recently experienced that disappointing side of his celebrity status when a family member thought they were stealthy in recording a personal conversation.

The Philadelphia rapper took to Instagram to make a statement about the negative changes that fame can sometimes encourage in the people closest to you. “Having a argument with family and saw they was secretly recording me… Who you letting hear it? Fame kinda ruined & changed a lil I must admit!” Meek wrote on his Instagram stories. 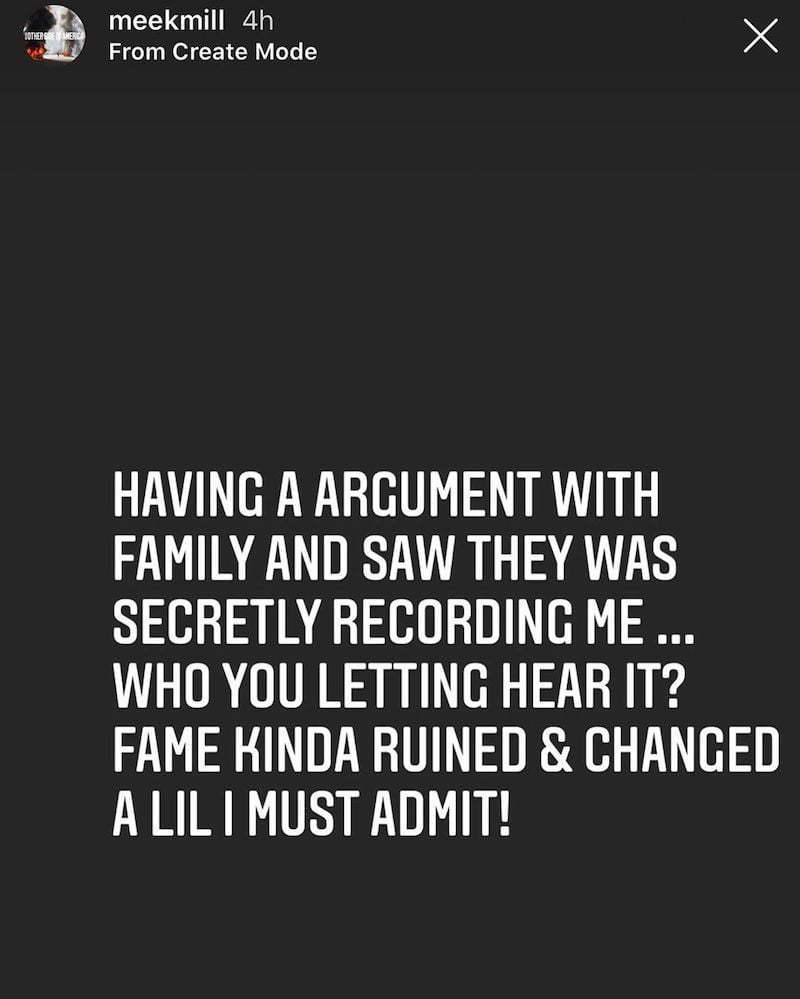 Meek Mill has had a rough history, and his entire story has been documented publicly. From his highly scrutinized relationship with Nicki Minaj a few years ago to his beef with Drake, the rapper has taken several L’s and is often in the headlines for criticism instead of his accomplishments. Recently it was even rumored that he might have hooked up with Kim Kardashian West during her marriage with husband Kanye West – talk about constant drama.

The “Lord Knows” rapper welcomed a baby boy with Milano Di Rouge fashion house CEO Milan Harris in early May. He was super excited about the new addition to the family too, especially considering the young king came into the world for his birthday. Meek was met with backlash for being engrossed in several social media feuds with rappers like Tekashi 6ix9ine and his ex-girlfriend Nicki Minaj while he had a newborn at home.

Unfortunately, less than 3 months after the birth of his son, Meek made another announcement on social media that he and Milan had separated. There is no doubt that the rapper is likely going through a tough time in his life, and it is really sad that the very people he should be able to trust most – his own family – have to be watched just as keenly as the paparazzi. We hope in time Meek Mill will find peace in his family and personal life again.