Vybz Kartel and D’Angel have both reacted to reports that they had an affair while she was married to Beenie Man.

Amid recent allegations that D’Angel and Vybz Kartel shared an intimate relationship while she was still with Beenie Man, D’Angel and Vybz Kartel have both come forward to denounce all claims. Artiste and label owner Don Mafia unleashed a bevy of allegations directed at his nemesis Beenie Man on Instagram yesterday. Don had made prior claims that their feud is due to improper monetary compensation.

However, Beenie Man had taken the opportunity to clear the air stating that Don did not accept his and D’Angel’s relationship and marriage. The pair have since separated, but it seems they will always have intertwined lives outside that of their son.

Laying on the drama thickly, Don dropped a diss track where he attacked Beenie for a number of things, most notably D’Angel’s alleged affair with Dancehall legend Vybz Kartel. Deejaying, “A come a tell lie bout mi nuh like D’Angel, den nuh yuh a bawl to mi when she go f*ck Kartel.” Don’s statements left the dancehall community reeling. This is largely in part to previous accusations that D’Angel had cheated on Beenie Man which is what was said to have led to their break-up. There is also the 2006 collaboration between D’Angel and Vybz Kartel titled, “Baby Father,” which is now being used as evidence of an intimate coupling.

It seems fans could not wait to find out if the juicy info relayed by Don Mafia was accurate, as one anxious party took the opportunity to comment on a photo D’Angel posted this morning, “Mafia said you was with kartel is there any truth to what was said,” the user queried. To which the “Stronger” singer replied, “you a pay she mind?” simultaneously dissing Don Mafia in the process by referring to him as a female. 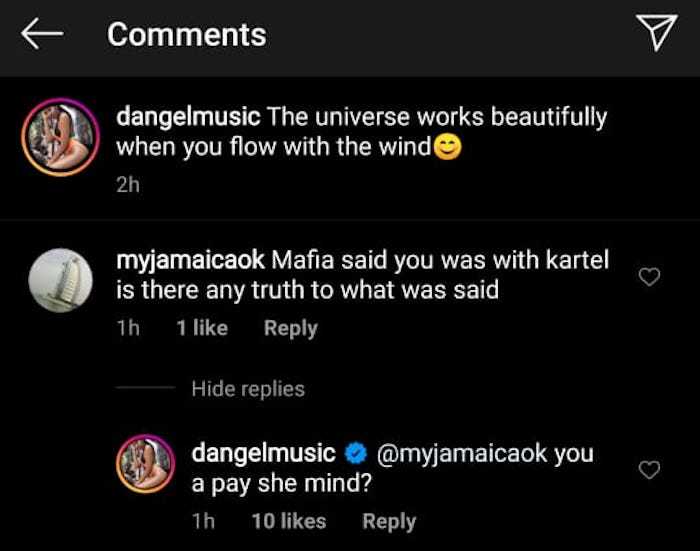 Another fan quickly responded stating, “everybody know that her 2 men in dancehall is Beenie and Bounty.. no need to add another.”

Vybz Kartel also spoke out on the accusation by posting an image of a clip on his Instagram Story of a video titled, “I Didn’t Know D’Angel Cheated on Beenie Man With Vybz Kartel”. The image also has the word cheater in bold over pictures of all three parties, Kartel, Angel, and Beenie. Setting the record straight, the Teacha captioned the post, “WRONG INFORMATION.” 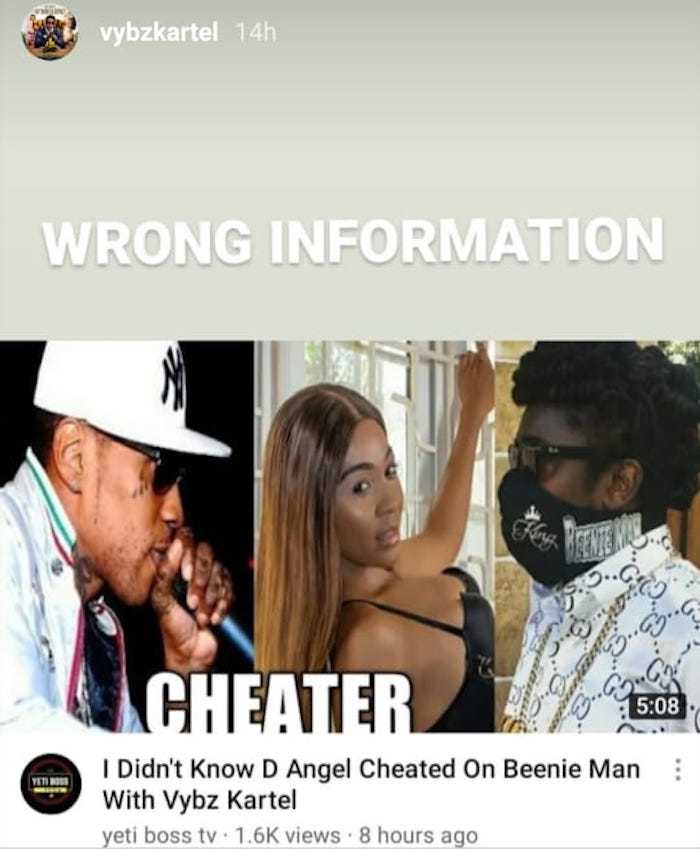 Beenie has yet to respond to Don’s claims, but it would probably be something along the lines of “Do you want to be that guy?”