Jada Kingdom puts her differences aside as she wishes condolences to Shenseea over her mother’s passing.

The dancehall community experienced a tragic loss on June 25 after learning of the death of popular artiste Shenseea’s mother. The “Blessed” singer broke the news on her Instagram page also sharing a photo of her mother lying in a hospital bed. She wrote a heartbreaking message, “Mommy my heart is BROKEN Mommy broken i never knew I had this much tears until this day! I ask God for strength just strength I love you Forever #RIP #RIP #RIP my mada and fada ina one!!! Jah know mi mada i’ll never forget you EVER!”

There was an instant outpouring of supportive messages from fans, friends, and fellow artistes, all offering their condolences. Many struggled to believe the incident citing how “healthy” Mama Shen looked. Shenseea and her mother had an extremely close relationship and bond, and she frequently posted videos of her mom. Mama Shen was always outgoing and jovial matching her daughter’s silly personality.

Out of the many who took a moment to share a kind word, no one would have ever expected that “Heavy” singer Jada Kingdom would be one of the well-wishers. This is due to Jada’s and Shenseea’s tumultuous past. The two are sworn enemies, and they constantly take shots at each other on social media. So strong is their hatred for each other that even when they make innocent posts, fans can’t help but assume that they’re secretly referring to the other party. It is as though one cannot exist without the other.

When Shenseea dropped “The Sidechick Song,” Jada became extremely vocal about being a side-chick versus a wife. She claimed that the side-chick position is a degrading one and made many statements about being better than that. Last year when Shenseea was allegedly involved in an altercation with her friend at a party, Jada had a lot to get off her chest regarding Shenseea. She classed her as a poor friend and took shots at her character. What makes their beef so interesting is the fact that at one point, the two were close friends. Their feud goes way back, and for a long time, fans did not believe they would ever see the two patch things up, or even at the very least become civil towards one another.

However, fans were given the shock of their lives when Jada Kingdom penned a dear message to her old friend, comforting her during her time of loss. “@shenseea I just got the sad news that your mother passed away. Regardless of our differences we’ve had over the years, today I’m standing up to respectfully send my condolences to you & your family,” she begins. 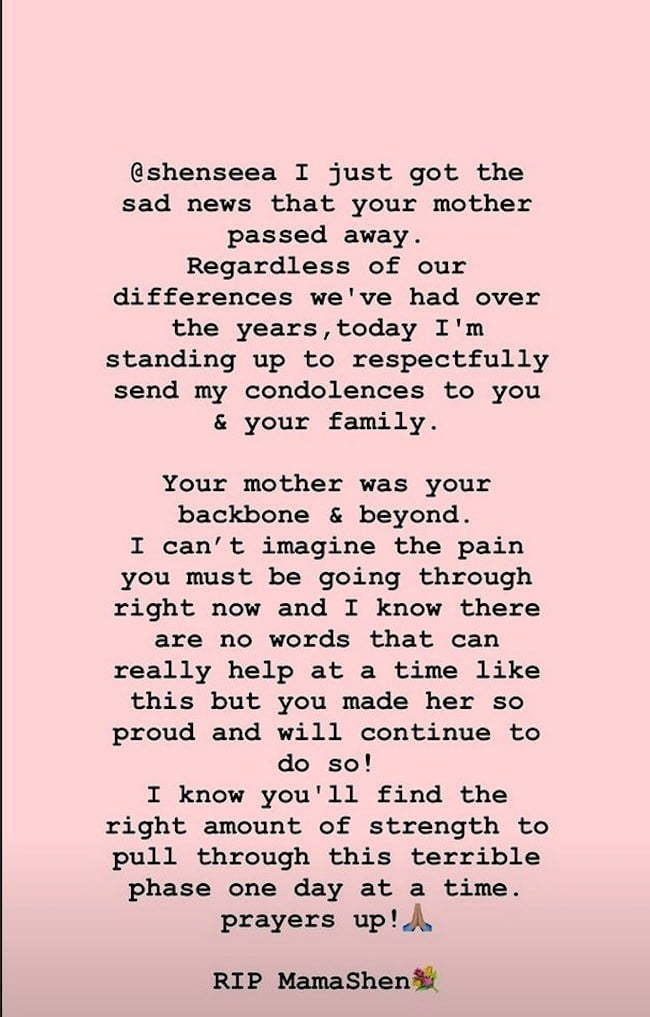 She goes on to sweetly say, “Your mother was your backbone & beyond. I can’t imagine the pain you must be going through right now and I know there are no words that can really help at a time like this but you made her so proud and will continue to do so! I know you’ll find the right amount of strength to pull through this terrible phase one day at a time. prayers up! RIP Mama Shen.”

Jada also tweeted out a message with her condolences, but it has since been deleted.

Fans praised Jada for her growth and maturity and commended her for being woman enough to reach out to Shenseea. One user stated, “Didn’t I just comment and said age is the beginning of wisdom and she made a HUGE step she paid her respects. Regardless of what they have or had going on Jada is a bigger person sensitive and sympathetic. We are all human and they were friends very close the must miss each other I hope out of something bad some mending can take place life is short RIP mammashen.”

While this might not be an indication of friendship, it can definitely be the start of something new. Hopefully, this is where the healing process begins for the pair. In a time like this, Shenseea certainly needs all the love, support, and positivity that she can get.