Vybz Kartel gets flirtatious with his new “boo” Lisa Mercedez on IG.

Dancehall artiste Vybz Kartel openly loves on his new “boo,” UK singer Lisa Mercedez, as he showers her with hearts while bidding her a happy birthday. When Lisa Mercedez staked her claim to Vybz Kartel only a week ago, fans were appalled. This was particularly due to the fact that she has never met the Worl’Boss and also due to him being in what many know as a longterm relationship with his baby mother, Tanesha ‘Shorty’ Johnson. Despite these factors, Lisa loudly and proudly declared that the Teacha was her man during Dj Lava’s Instagram LIVE quarantine show Chat and Laugh.

After asking the host if he’s ever experienced a strong spiritual connection with a woman, Lisa Mercedez took the opportunity to explain exactly why it’s possible for her to feel the way she does, “The thing is, yuh nah fi meet somebody to have that spiritual connection and it just feels like you and da person deh did deh in a next lifetime? A da connection deh mi have wid Vybz Kartel… so sometimes people might seh, ‘oh, she nuh meet him yet’ and rae rae but mi a go meet him soon.” 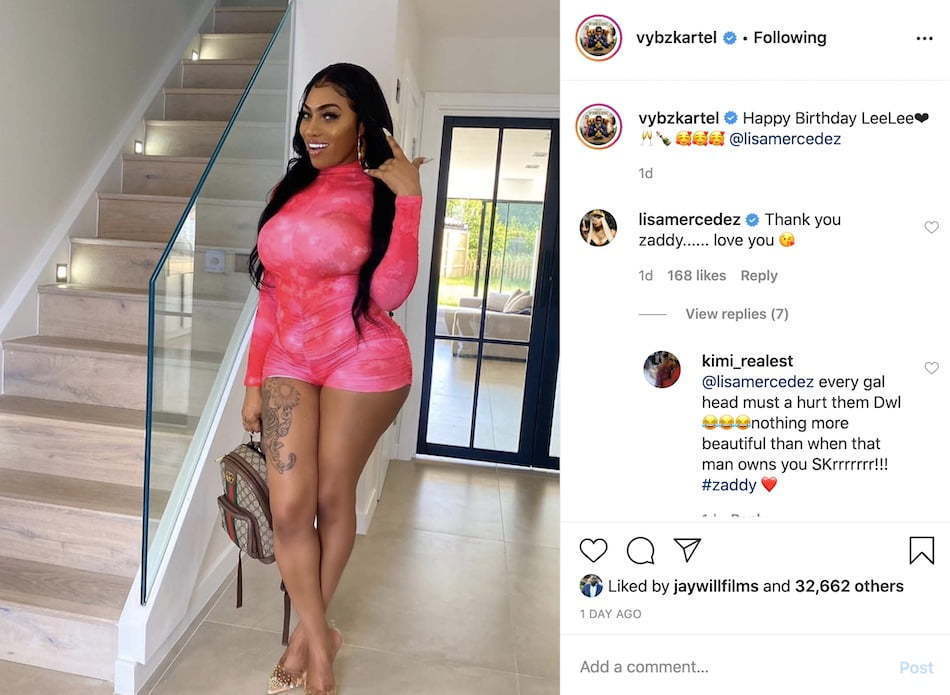 However, fans doubted the validity of their relationship and immediately began circulating Lisa’s photo on various gossip sites, meanwhile refuting her claim. In a one-up move, Vybz Kartel himself added fuel to the fire as he utilized his Instagram page to sweetly and lovingly tell Lisa, “Happy Birthday.”

Posting a sexy photo of her in a skimpy pink romper, Teacha captioned the photo,” Happy Birthday LeeLee @lisamercedez,” with multiple hearts, wine glasses, champagne and heart faced emojis. Lisa replied in the comment section, Thank you zaddy… love you,” with a kissing emoji. He then quickly responded with multiple hearts, obviously showcasing how much he loves her. Kartel then posted a second photo of Lisa Mercedez followed by a third post consisting of a series of photos wishing her happy birthday.

His fans and haters were thrown into a frenzy as many either added their own bday wishes or responded accordingly to the controversial gossip surrounding their relationship, stating that Vybz Kartel has started an uproar online. One user commented, “Jah jah dj from day them a wait but u kno the teacha never too late watch some a the dutty mix up people them a come cross now,” while another added, “Kartel trending in 5,4,3,2…”

Seeing that Lisa has a feature on Kartel’s upcoming album, “Of Dons & Divas,” all this gossip is only generating a positive buzz and effect. And we can, without a doubt, look forward to her recording more music with her man, the Worl’ Boss.