Nicki Minaj is joining Tekashi 6ix9ine on his new track “Trollz” as the rapper shoots at his first No. 1 single since his release. Recently some fans were enraged about whispers that Nicki would be teaming up with controversial rapper 69. While the two New York rappers have worked together before on what is widely considered 6ix9ine’s most popular song predating “Gooba,” fans were reluctant to approve the Barbz Queen embarking on that journey with the 24-year-old rapper again amidst his stint as a federal informant.

Today Nicki Minaj and some other sources made the announcement that the new collaboration called “Trollz” will be released on Friday. Tekashi 6ix9ine got himself into some hot water with Billboard recently when he accused them of rigging the chart, but it seems he has now chosen to play smarter and adopt a major revenue boost tactic from Ariana Grande and Justin Bieber.

Tekashi posted a photo of himself and Nicki where he also tagged Trey Songz. “nObOdY gOiN To WoRk wiTH HiM No mOrE,” 69 wrote. 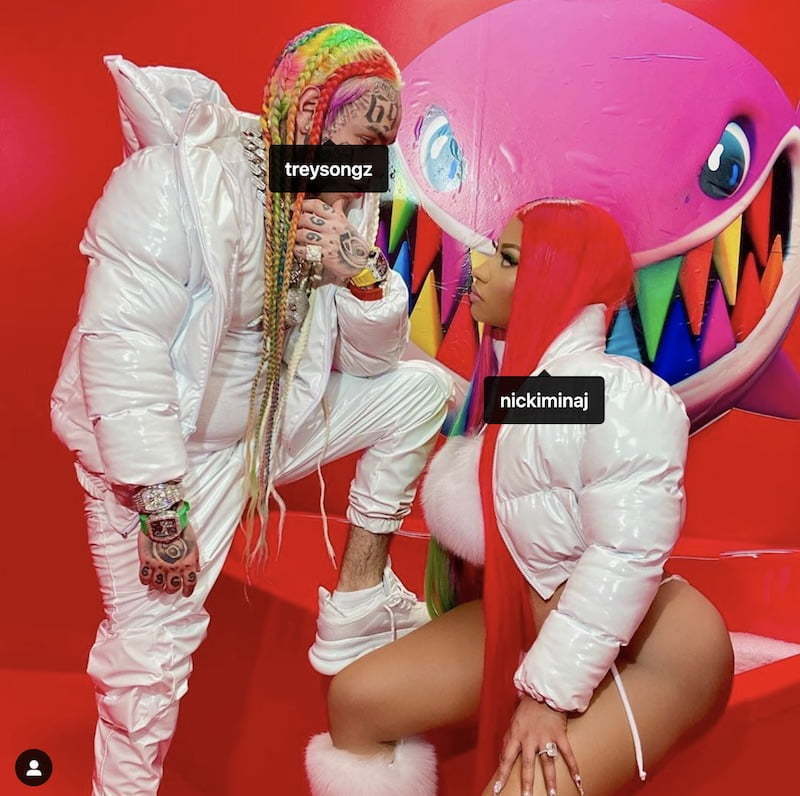 Similarly to how the two pop artists premiered merch on their individual webstores to promote their song “Stuck With U,” at a time that Tekashi considered “last minute,” and Billboard sais the sales helped them secure the No. 1 spot, 6ix9ine and Nicki Minaj are offering “Trollz” merch also. The wardrobe that both rappers’ webstores exclusively unveiled today is likened to their outfits worn in the video. It includes “Trollz” jackets for men and women, shorts for women, as well as shark pants. You can get a jacket for $80-85 and some shark pants for $70 if you’re into that sort of thing. The website also offers the new single in vinyl, CD, and cassette as well as the digital copy.

Tekashi 6ix9ine’s new single will also be beneficial to social justice causes. The last time the rapper tried to donate $200K to No Kid Hungr Foundation, he was rejected. However, according to Nicki, some of the revenue generated from “Trollz” will be donated to bail out protesters. Alongside a photo of her and 6ix9ine both dolled up in rainbow hair on the set of their new music video, Nicki wrote, “A portion of the proceeds from #Trollz including merch items, will be going directly to The Bail Project Inc.,” the rapper pledged.

“The fund provides free bail assistance to low-income individuals who can’t afford to pay bail while awaiting their trial,” she continued. “We want to protect and support the thousands of brave people working on the front lines of social justice, using their voices to demand AN END to the targeting and killing of Black Americans by the police.”

Nicki recently spoke up about the social justice issue that is looming over America’s atmosphere at the moment and championed justice for George Floyd. She was one of the slew of celebrities who demanded that all the officers involved in Floyd’s unlawful murder get charged before the Governor finally announced their arrest warrants.

A portion of the proceeds from #Trollz including merch items, will be going directly to The Bail Project Inc. The fund provides free bail assistance to low-income individuals who can’t afford to pay bail while awaiting their trial. We want to protect and support the thousands of brave people working on the front lines of social justice, using their voices to demand AN END to the targeting and killing of Black Americans by the police. #BlackLivesMatter link in bio to Pre-save #TrollzVIDEO tmrw @ midnight ???????? NickiMinajQueen.com

With political tensions remain high, and the world seems to be in a very delicate time, Nicki Minaj also found herself on the other end of some racism controversy through association. Minaj earned her first No. 1 on the Billboard Hot 100 just recently with rapper Doja Cat who many people called out following accusations of racist behavior. The “Say So” rapper has since apologized for offending anyone in an Instagram Live session where she explained why she participated in what has been deemed white supremacist chat rooms and made a song about a racial slur.

It seems Nicki Minaj is on a run with controversial co-stars for her collaborations these days. While she aims for another No. 1 on the Billboard Hot 100 with Tekashi 6ix9ine, the rainbow-haired rapper is also seeking to top the charts to further commemorate his unorthodox return to his music career. Nicki and 6ix9ine have made magic together before on their 2018 collaboration “FEFE,” which is a certified 8x Platinum hit that peaked at No. 3 on Billboard. Do you think they will take the No. 1 spot this time?