Dwayne Wade might have been a Cavalier last, but his new hairstyle is bringing plenty of Heat!

The basketball star revealed his new do on TikTok starting a firestorm of ‘wows,’ ‘wtf’s’ and ‘who dats.’ Wade’s red-hair-don’t-care moment shows up in a short clip, also featuring his daughter Zaya, who’s now sporting a bright pink (who-cares-what-you-think) mane prompting the question, ‘who inspired who?’ Set to Sleepy Hallow’s “Deep End Freestyle,” the clip shows the new redhead in matching shorts stepping slowly into the shallow end of a pool, running a hand over his head, you know, in case you missed it. The pair then reverses down a driveway in a Porsche convertible, top-down, so you don’t miss the matching styles, on their way to paint the town — or maybe just the driveway as city wide lockdowns linger amid the pandemic.

The ‘Deep End’ reference might be a jab at anyone about to label him crazy, but there’s possibly a more sincere meaning behind the antics. There’s a playful energy around the visual, and this may be another move on Dwyane Wade’s part to help Zaya adjust after coming out as transgender earlier this year. 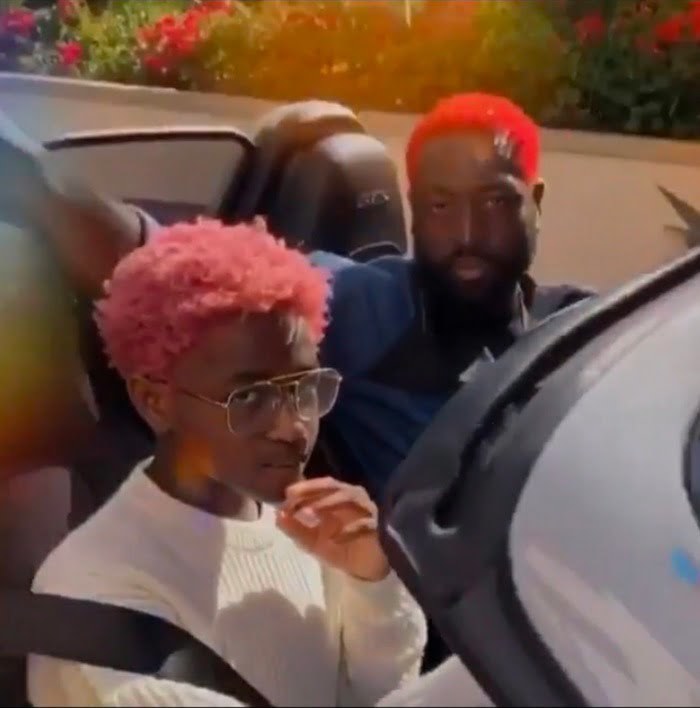 In February, Zaya, Wade and his wife, the ageless actress Gabrielle Union, wore matching tailored pants suits to the Truth Awards, ensuring she was neither out of place or overdressed at her first red carpet event since the reintroduction. The pair has been openly supportive of Zaya, sharing their stance and defending her bold decision.

“Last night was Zaya’s first red carpet and we couldn’t have been prouder of how she handled the questions that were asked of her,” Wade wrote back in March. He was also quoted on the Ellen DeGeneres show as saying “we take our roles and responsibility as parents very seriously.”

If that’s the case, then it’s no surprise that they’d make a family affair of adding some color to quarantine. Getting ‘roasted’ in the comments is a small price for embracing his girl dad duties, something fellow hoopster Kobe Bryant was praised for before his untimely death. His new coif is as now as red-hot as Mrs. Wade and their youngest daughter Kaavia might find the sight endlessly amusing.

What do you think of Dwayne Wade’s new do: red carpet chic or a red-hot mess?