Cardi B called out trolls who questioned her decision to post her Grammy Award after Roddy Ricch did the same thing.

Cardi B joined the winner’s club in February 2019 when she became the first female recipient of the Grammy award for Best Rap Album. The night was a huge deal for female representation, even though some felt that the initial accolade should not have gone to the Bronx rapper. Still, Cardi made a point to show off her statuette when it did arrive just a few days ago — even though some haters accused her of doing it for attention. While folks are within their right not to be a fan of the “I Like It” rapper, Cardi felt such hate was a double-standard as none was shown to a fellow rapper when he did the same.

The National Academy of Recording Arts & Sciences must have been doing a massive mail send-out as Roddy Ricch, who won Best Rap Performance at this year’s ceremony, also only just received his Grammy. The award was for the song “Racks in the Middle,” which he did with the late Nipsey Hussle, and Roddy Ricch made sure to pay his respects in the picture of the golden gramophone he posted on his Instagram Story. Upon seeing the love that “The Box” rapper got, Cardi posted tweets that pointed out the contrasting reactions. 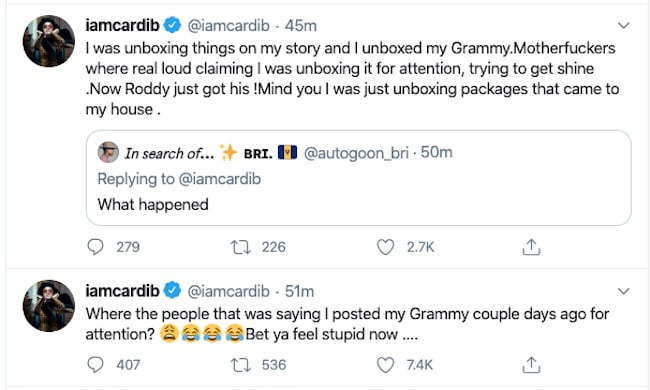 “Where the people that was saying I posted my Grammy couple days ago for attention? Bet ya feel stupid now,” she wrote, before following it up with, “I was unboxing things on my story and I unboxed my Grammy. Motherf***ers where real loud claiming I was unboxing it for attention, trying to get shine. Now Roddy just got his! Mind you I was just unboxing packages that came to my house.”

The tweets have since been deleted, but it’s possible that hurt is still brewing in her inner drafts.