DaBaby has reacted to reports there is an active warrant out for his arrest after threatening to kill a limo driver in Las Vegas.

DaBaby is calling cap on reports he might be heading to jail where he would likely be at high risk for the deadly disease, COVID-19. It’s no secret that the Kirk rapper was going through some stuff a couple months ago, and some of those demons might be coming back to haunt him now. TMZ reported that the Charlotte rapper assaulted a driver in Las Vegas back in November last year.

According to the site’s law enforcement sources, an unnamed driver picked up DaBaby and his friends in a Mercedes-Benz sprinter van. The driver told police officers that he made a few stops before noticing that Baby and his crew started lighting up their blunts. He told them that’s a big no-no, and that triggered an argument between the two parties. The driver allegedly told law enforcement officials that the rapper and his crew threatened to kill him had they been in their city. 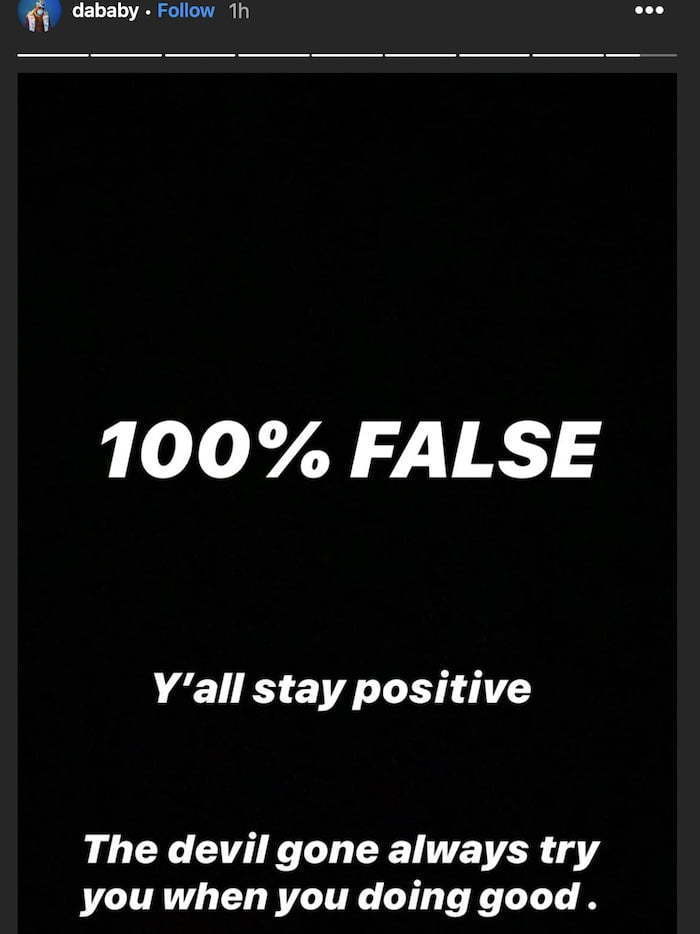 The limo driver then took the men back to the Hard Rock Hotel, where he picked them up and asked to be paid, but instead, DaBaby punched him in the back of his head and told him that he’s not the boss. Police are now investigating the incident, and there is an active warrant out for DaBaby’s arrest, per the reporting.

The North Carolina rapper has since reacted on his Instagram Story, saying that the news reporting is totally false. “100% FALSE,” he wrote. “Y’all stay positive. The devil gone always try you when you doing good.”

Back in the fall of last year, DaBaby had a few runnings with law enforcement over similar reported incidents, including an assault on a hotel worker in December, which was caught on video surveillance. He also copped an arrest for beating up a promoter in Miami in January and another case for allegedly hitting a female at one of his concerts in Tampa, Florida.