Tekashi 6ix9ine is finally dropping new music and possibly a music video after getting permission from a judge to venture into his backyard to shoot music videos.

After the type of 2019 that rapper Tekashi 6ix9ine faced, many persons thought that he would have considered hanging up his microphone and quit rapping. Quite the opposite is happening as the “Gummo” rapper has been riding the major increase in his popularity and slowing settling back into his old ways while serving time at home. While his social media use has not been excessive, he did have time for one epic troll, which saw him embracing his ‘snitch9ine’ reputation.

The “FEFE” rapper replaced his old Instagram display picture with one of a smiling cartoon version of himself eating cheese while making himself comfortable on a rat trap. The ultimate confirmation that things are slowing getting back to normal is the fact that Tekashi recently posted on his IG Stories what seems to be a release date for some new music. The rainbow-colored haired rapper questioned if his fans were “Ready,” before dropping a goofy looking emoji followed by the proposed release date, May 8th.

The rapper’s post came just a little after popular hip hop commentator and former associate of Tekashi, Dj Akademiks released the news that Judge Paul A. Engelmayer agreed to the rapper’s previous request to be able to “to conduct employment-related activities outside of the residence but within the confines of the rented property.” 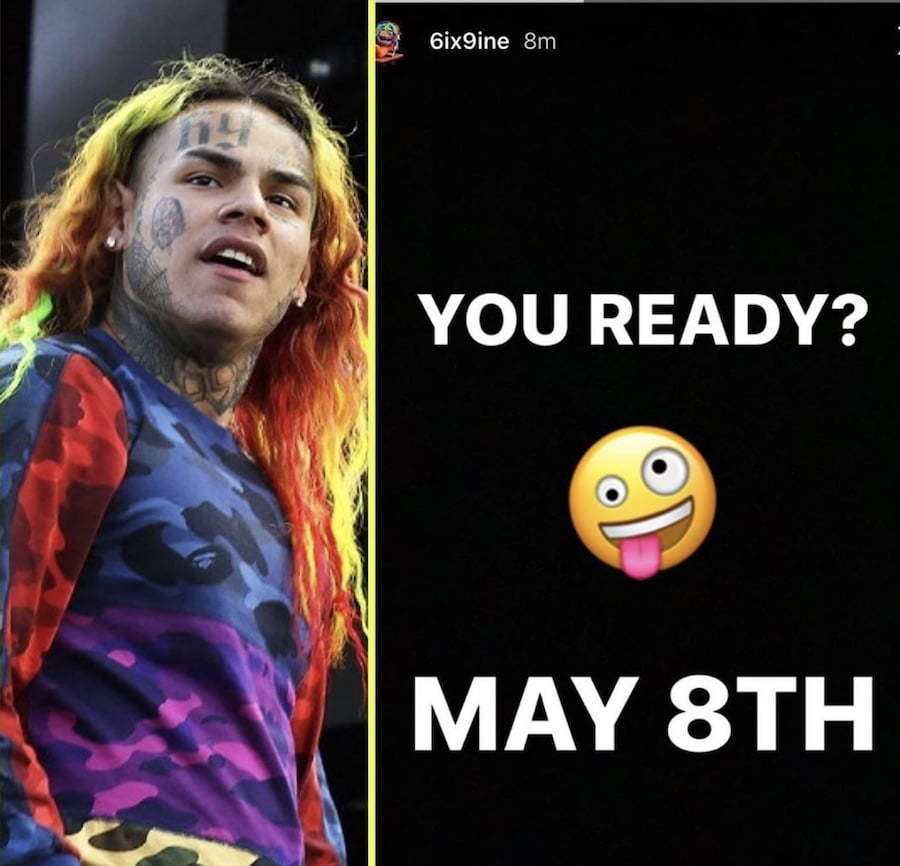 While is exact schedule is at the mercy of his probation officer, the tweet from Akademiks did give a breakdown of the time he’s allotted per week. He wrote, “Judge signs off order to allow 6ix9ine to go outside in his backyard for 2 hours per week to record music videos and also to go to his basement for 8 hours per day to record music.”

The controversial rapper was released from prison a few weeks ago in order to serve the final couple of months of his already reduced sentence at home due to health concerns brought on by the coronavirus outbreak.

It’s only natural that the rapper gets back to doing what he loves, after all, he did sign a $10 million contract while he was incarcerated. He is apparently working on dropping a lot of new music for his fans, which could include two different albums, one in English and another in Spanish.

With the recent green light from the judge, we could see the lavish purchases that the rapper recently made being used throughout his music videos.

It seems 2020 is working out to be quite a prosperous year for Tekashi.

Breaking: Judge signs off order to allow 6ix9ine to go outside in his backyard for 2 hours per week to record music videos and also to go to his basement for 8 hours per day to record music.