Mavado and Vybz Kartel have exchanged more words online since the incarcerated deejay posted a photo go both their sons on Instagram.

Dancehall mogul Vybz Kartel has been enjoying trolling various dancehall artists on social media lately. As the clash between Chronic Law and Jahmiel raises the tension among others, Addi has made use of social media since he can’t directly reply in song.

A quick scroll through Kartel’s social media pages reveals that the deejay has had no mercy on the likes of Alkaline, Jahmiel, etc. but his latest post that mentioned Mavado’s son Dantay Brooks triggered a direct response from the Gully Gad. Kartel’s intention behind the post remains a mystery as he captioned the image of his and Vado’s sons together “History Pic! Busoff n Laugh Dante.”

Before Kartel posted the photo, Mavado took to Instagram to write what many fans have interpreted as a subliminal message for the incarcerated deejay. Captioning a photo of himself that he recently posted, Vado wrote, “Chat chat chat I don’t have to say a word you know my actions very dark.” However, it didn’t take long for him to break his silence as Kartel had to have hit a nerve by mentioning his kid. 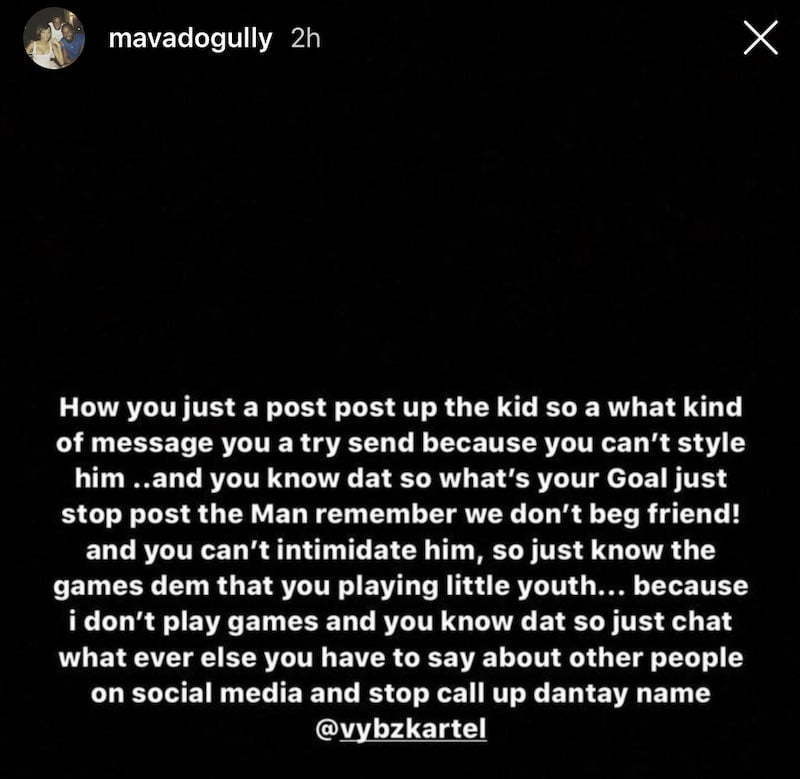 Mavado addressed the post in his Instagram story on Saturday (April 25). “How you just a post post up the kid so a what kind of message you a try send because you can’t style him… and yu know dat so what’s your goal,” he wrote. “Just stop post the man remember we don’t beg friend! And you can’t intimidate him, so just know the games dem that you playing little youth… because I don’t play games and you know dat so just chat whatever else you have to say about other people on social media and stop call up Dantay name @vybzkartel.”

Once Vybz Kartel caught wind of Mavado acknowledging his post, he took to Twitter to respond directly as well. “All when we a war 1Millionyear mi wouldn’t style u son ute,” Teacha wrote. “Him tougher dan u! Come outta u feelinz punk. Wah kinda f***kry ya post pon u story bout intimidate. U too corrupt so u think everybody corrupt.”

Now that Vybz Kartel has denied any foul play, his mysterious post is again open to interpretation. If Vado’s son was not just a casualty in this verbal war, what do you think the Worl’Boss really intended? 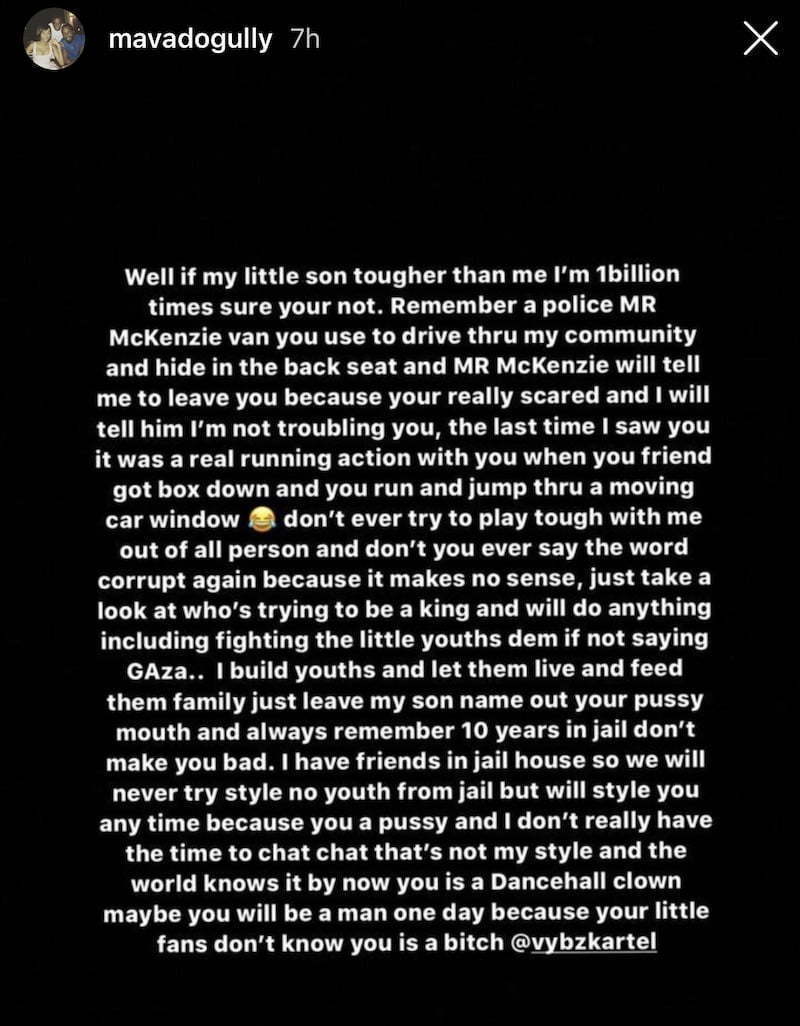 “Well if my little son tougher than me I’m 1billion times sure your not,” Mavado added in another post. “Remember a police MR McKenzie van you use to drive thru my community and hide in the back seat and MR McKenzie will tell me to leave you because your really scared and I will tell him I’m not troubling you, the last time I saw you it was a real running action with you when you friend got box down and you run and jump thru a moving car window Pr, don’t ever try to play tough with me out of all person and don’t you ever say the word corrupt again because it makes no sense, just take a look at who’s trying to be a king and will do anything including fighting the little youths dem if not saying GAza.”