No one would have predicted that the parody done by O.T. Genasis back in December 2019 would turn into such a mess in the new year. To be honest, 2020 has been on a wayward path since its beginning, and therefore, we should not be surprised. Things got pretty messy in the last few days as O.T. supposedly hit below the belt by calling out Keyshia Cole’s sister, Neffeteria “Neffe” Pugh, and their mother, Francine “Frankie” Lons.

According to O.T., he was one of Frankie’s dealer when he slinging dope back in the day. “I almost went to jail one time… for selling cracc to yo momma,” O.T. posted. He also got at it in the comments, meanwhile tagging Neffe, “Guess I ain’t da only one in love wit da coco” in the caption, tagging Pugh.

Frankie checked herself into rehab earlier this year for substance abuse. The Cole family has been battling the effects of substance abuse for years however, it was the 2006 reality show of the family that really revealed the dark truth to the American public. 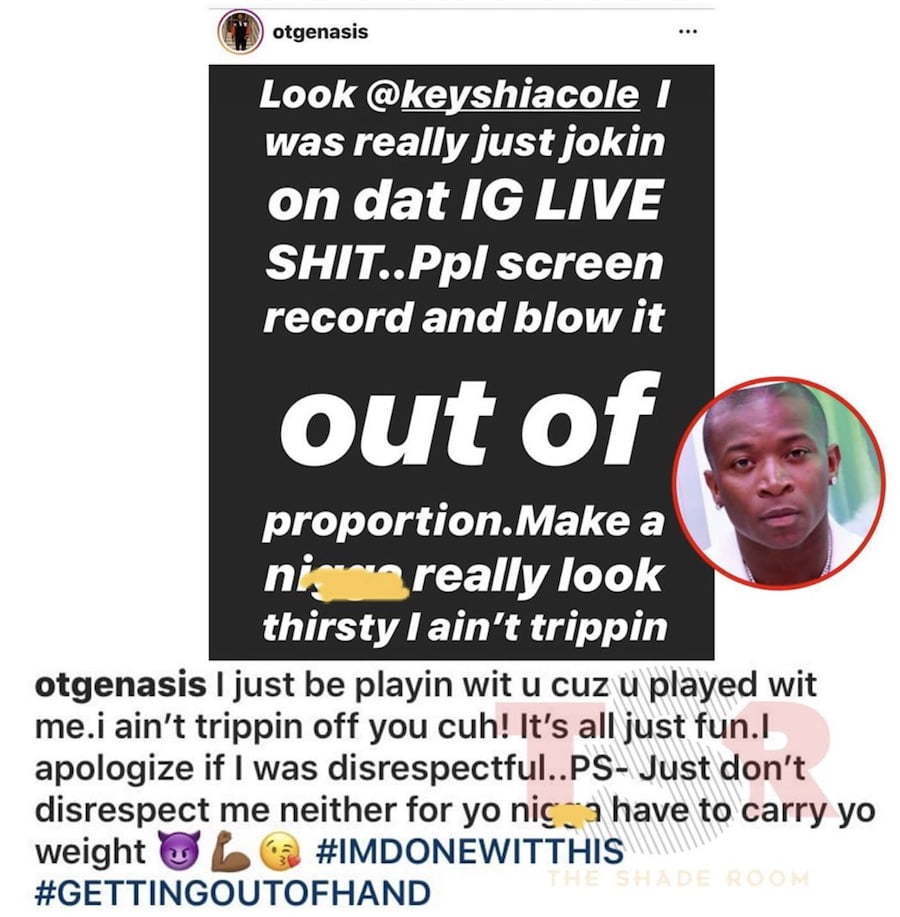 The latest jab at the Coles was not the first for the rapper who previously went for Cole’s personal hygiene, stating her private area smells like fish sticks. He did apologize for his comment and alluded to social media users doing the most, “Look @keyshiacole I was really just jokin on dat IG LIVE SH*T…Pple screen record and blow it out of proportion. Make a ni**a really look thirsty I ain’t trippin.”

However, his apology also came with a warning, “I apologize if I was disrespectful.. PS – Just don’t disrespect me neither for yo ni**a have to carry yo weight.”

Whew! #OTGenasis responds to #Neffe after they’ve been going back & forth all day ? (SWIPE)

Keyshia Cole called out the rapper for his childish ways among other insulting, animalistic comments.

“Neffe” Pugh also got in on trolling O.T. after he posted a snippet of her confessing an urge to perform a certain sexual act. However, she was not to be outdone and broke out some receipts of her own; a snippet of O.T. stumbling to answer a question about his stint in jail during an interview.

While referring to him as a female, she asked, “Listen niece why did the jail conversation make you nervous and stutter what happened to you in there? Is thats why you joined a gang to feel protected and gangsta?” she questioned before concluding, “We all know your still a insecure little boy who try to attack women to feel good that’s why all your women leave you.”

She had some more words for the rapper, “Men with Mommy issues trying to tear women down I know you got bullied in school and was always denied by the pretty girls clearly.” She questioned his gangsterism before instructing him to go on home to take care of his newborn.

#PressPlay: #OTGenasis hopped on live to give a lil’ explanation about why he’s been going back and forth with #KeyshiaCole’s sister #Neffe. Apparently, he isn’t here for anybody speaking on his son! (SWIPE)

Keyshia Cole came at O.T. back in December after he released an off-key version to Cole’s 2005 track “Love.”