Beenie Man takes the high road as he refrains from firing back at Vybz Kartel’s latest shot.

An outspoken fan stirred up a bit of trouble in the dancehall arena this week when he made a comment online questioning Vybz Kartel’s dancehall title. The remark he made, which not only denounced Kartel’s royal status in dancehall but was also blatantly disrespectful, was addressed by the incarcerated deejay directly who ended up dissing Beenie Man in the process.

The fan commented on an Instagram post claiming that “Beenie man a king of the dancehall,” he wrote. “So stop give u self false title b***man.” Vybz Kartel was swift with his response and strong with his wrath. “Hey boy,” he wrote back to the dancehall fan. “Beenie a f**k you?? Queer a dancehall dat,” Kartel said.

Many expected that Beenie Man would eventually respond and maybe throw a few jabs back at Vybz Kartel for this. However, the self-proclaimed King of Dancehall used the opportunity as some sort of false validation for his kingship. Beenie posted to his Instagram page an old photo of him and Vybz Kartel at a party. Perhaps the “Girl Dem Sugar” was trying to say, the incarcerated deejay approved of him once. Beenie added a second photo to his Instagram post, which was a screenshot of the comments made by the fan and Vybz Kartel as a contrast to the first image. 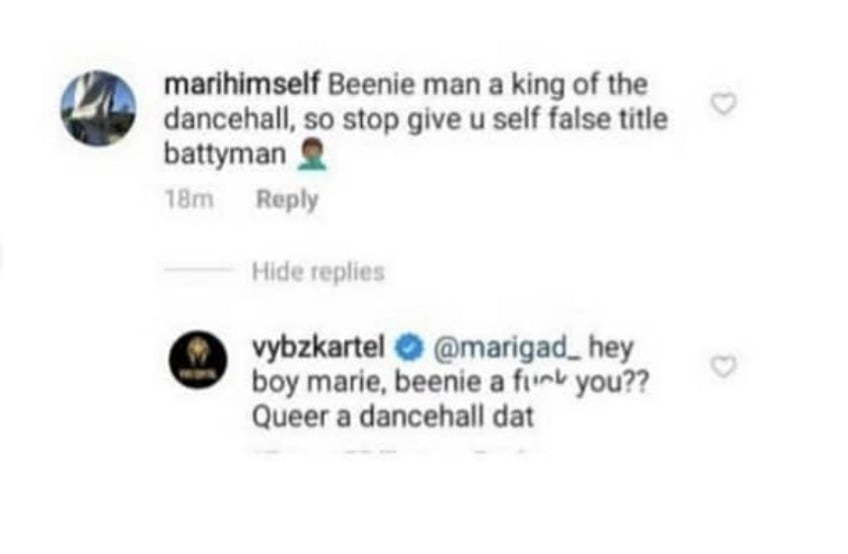 Well, while some think Beenie Man did the right thing in “blessing” Vybz Kartel rather than bashing him, many still believe that the dancehall doctor turned king is a weakling to not enter the chat wielding a firey response. A soft answer turneth away wrath. Whoever is advising him must be versed in the art of war because I mean really, would it even be a fair fight? Passive-aggressive Beenie is probably his best bet to maintain that he is the king without poking the bear, but it will remain debatable, to say the least.

#Beenieman Taking The Highroad ??Swipe Left. Did you agree with #VybzKartel?