Dancehall deejay Quada, who is already battling some legal problems, is now caught up in another fiery debate/family feud about his loyalty to his “GAD,” Popcaan.

The artiste was left to defend his name after dancehall producer NotNice mentioned that Quada expressed to him that he was not quite happy with the way his career was heading under Popcaan’s guidance. According to NotNice, the level of disgruntlement towards Popcaan saw Quada linking during a time when Popcaan was abroad. The link was to facilitate the recording of one of Quada’s biggest tracks, “Celebration.” During production, he gave his creative input on the track by getting Jah Vinci to work the chorus. However, Popcaan was not happy with the finished product Quada brought to him and spoke out against the release. The song was eventually released to Youtube, late October 2018.

With such claims from NotNice, it is quite understandable why Quada would want to clear the air and give his own account of the situation. The “Reflex” deejay took his place before the camera and questioned NotNice’s prior claims, “Which voice note me ever send you a bun out Popcaan, my boss, me don?”

After a quick flip of his polo cap, which will be seen as his favorite prop throughout the Live video, he once again questions where NotNice got his information. He also showed just how unwise it would have been for him to confess something of that matter to NotNice, who at that time had very strong ties with Popcaan. 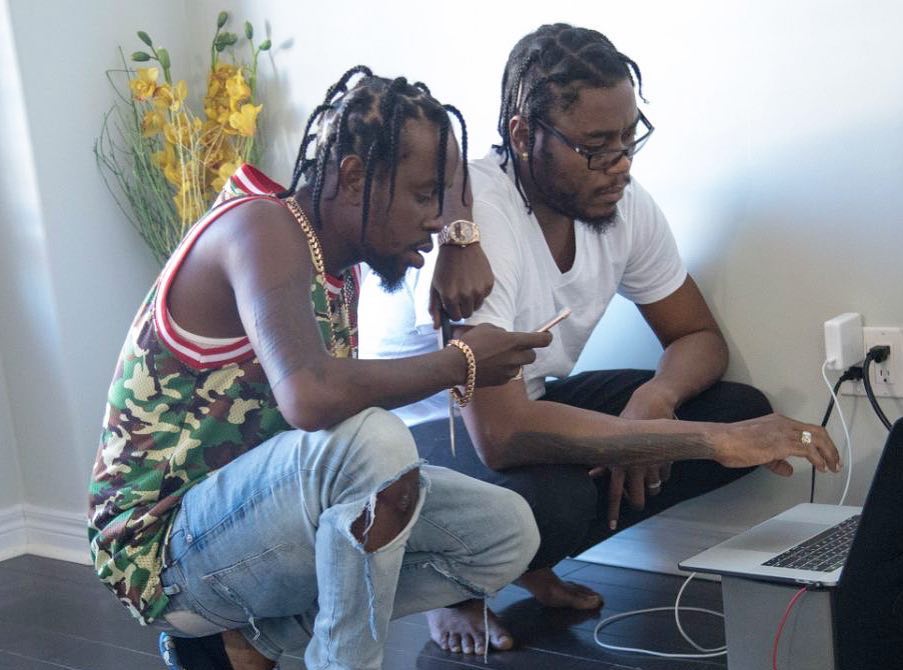 Quada also iced NotNice’s words that he was forced into a contract. “It take me so long fi even sign me contract, so til all me boss a wonder if me a different yout from him,” mentioned the artiste. He also implied that the producer was the one trying to stir arguments surrounding his contract, constantly questioning what was happening to his career whenever they met.

According to Quada, he shrugged those questions and simply focused on being patient, waiting in the wings until it was his time. “Loyal same way, never skip no line, never bawl, never complain to nobody,” Quada said.

While it was not always peachy to be around “The Gad,” everyone still kept it cool and did not choose media outlets as their way to deal with any disagreements. “Cause a Papa Skull that, Papa Skull a we own, Papaskull make sure say the wol a we known, people know we breda and man owe him we life fi that breda dawg,” he confessed. Later in the video is disclosed how persons have questioned his loyalty to Popcaan in the past; however, he reiterated, “Me nah no sell a sellout, after me a no shop.”

While keeping it cool and free of any disrespect to NotNice, he highlighted just how humble he is, using his decision to allow Jah Vinci to sing the chorus of “Celebration” as an example.

The main idea behind Quada doing an Instagram Live session was to show just how loyal he is to Popcaan, and he did that profusely. He used various other examples of Popcaan delivering him from his days of sufferation to the point of stature, as grounds for his unmovable faithfulness.

He also had some more words for everyone doubting where his allegiance lies. “F**k sweet uno dawg, Popcaan carry me to the platform already, wa more uno want? Want me fi tell Popcaan fi dip inna him pocket and give me money?” he questioned.

“Just fi even parr with Popcaan or de roun Popcaan a the greatest joy. That a weh me know, that a weh me used to wish for before me de ya so, that’s why me tattoo Unruly inna me kin breda,” alluding to the huge Unruly branding that runs the length of his arm.

Quada also continued the spilling of tea, when he mentioned that “1Word”, better known as Jafrass, confessed while in England that he would quickly sign to the Unruly label if Popcaan approached him with a contract, which contradicts the rundown that NotNice gave in his video.

While Jafrass has not gone Live to tell his part of the story, he did mention the following on his Instagram account. “Mi deven know Steve Harvey much less fi in a family feud,” he jokes before continuing, “bun off bad energy my people we are going through some of the most dangerous times of our lives were COVID-19 has killed thousands of our love ones and endangered a lot of families, let’s not make COVID-19 win let’s stay fully quarantined and live the dream.”

Mi deven know Steve Harvey much less fi in a family feud ? bun off bad energy my people we are going through some of the most dangerous times of our lives were COVID-19 has killed thousands of our love ones and endangered alot of families, let’s not make COVID-19 win let’s stay fully quarantined and live the dream #jealous #imblessed #wellprecise #feelings #sorich #1wordmixtape #wicked ??

Quada concluded his vide by sharing just how loyal he is. “All if Poppy look pon me tomorrow and say Quada me nah feel your energy youth, me will never diss Popcaan,” he said.

Some fans have questioned the level of loyalty which the artiste is confessing.

One person commented, “I don’t understand this loyalty thing when it comes on to business. Quada you are clearly brainwash you don’t owe Propcaan anything… Business is business cut the Gad, Don and loyalty talk. As you said Propcaan is your boss that’s more appropriate cause it’s all business do you think down the road if you are not singing and not bringing in any money Propcaan will keep you around?”

Many other fans simply wished this could have been dealt with in person instead of on social media.