NotNice clapped back at Popcaan while trying to expose Quada as disloyal to the Unruly Boss.

There are no rules when it comes to the game of spilling the tea. That’s at least when playing with someone who is not too nice about what or who he reveals to the public during the process. Over the last couple of weeks, we have seen deejay Ja Frass, singer Jah Vinci, Unruly boss Popcaan, and producer NotNice, trading words on social media. NotNice’s most recent upload as drawn another name into the mix, Popcaan’s protege Quada, who also took to Live to share his side of the story.

In a rundown of what has already unfolded, sees Popcaan being met with strong opposition from NotNice after addressing Jah Vinci as “fish tea” on his Instagram Live. Popcaan decided he was not taking NotNice’s claims of him being a “P***y” lightly, choosing to offload on both Jah Vinci and his label boss, from a video shot in his ride.

Based on the accounts of both Popcaan and NotNice, the beef stemmed from a show in England about 2 years ago, where NotNice stood as Popcaan’s disc jockey. Due to the circumstance of how the earnings were distributed, the top producer was not paid for his services, even though he footed his own per diem for the month-long trip. In addressing the situation, he also recounted how terrible the sleeping arrangements got, with himself having to share a chair with another individual; meanwhile, Popcaan rocked a separate room. 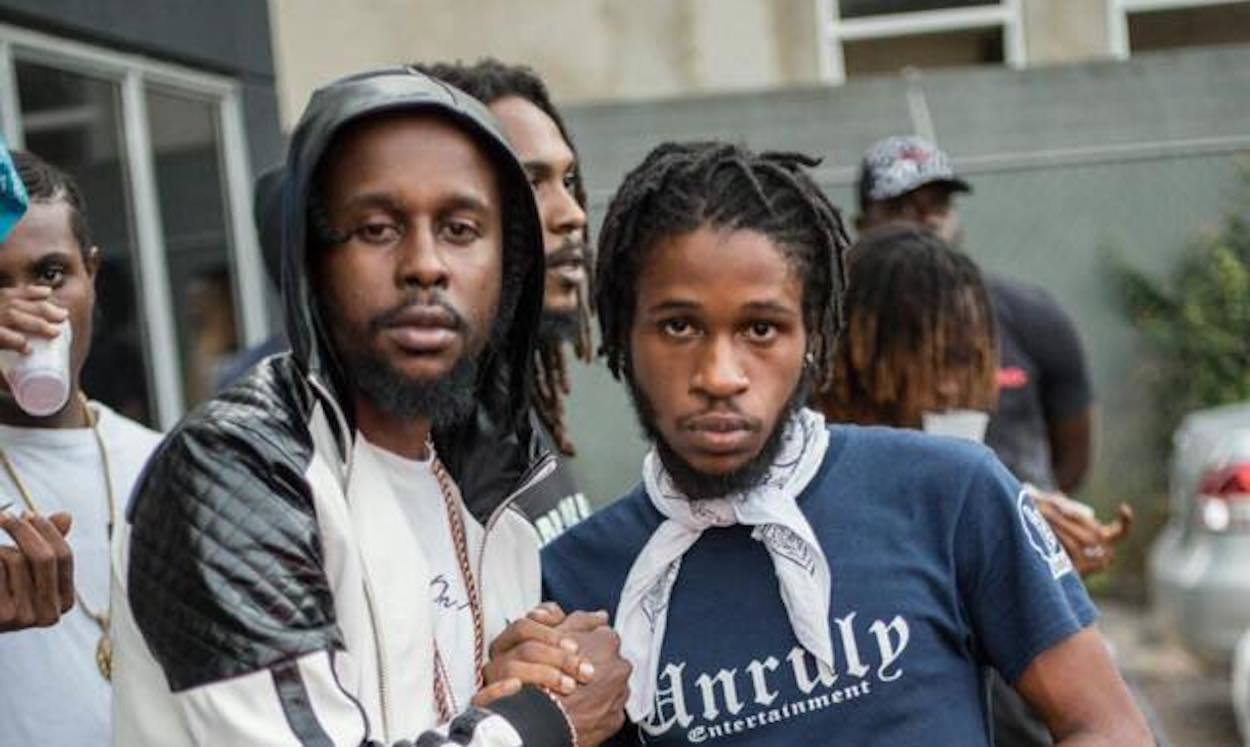 However, based on the working and personal history both men share, Popcaan doesn’t feel that the money withheld should have lead to NotNice talking behind his back and refusing to link up to get more work done. However, it’s hard for NotNice to see things from Popcaan’s point of view, as he recalled, out of 5 shows, 3 were sold out, which means there was clearly some money in the kitty.

While money owed from the show was at the core of the breakup, it seems there were other factors that influenced the falling out of the once close friends.

NotNice also accused Popcaan of shady business tactics in terms of the management of upcoming acts Ja Frass and Quada. According to NotNice, Ja Frass was signed to his label, and Popcaan pushed to sign Quada to his label. Nonetheless, Ja Frass would still accompany Popcaan on shows overseas even if he had prior arrangements, which sometimes forced NotNice to refund payments for shows. After some time, Poppy allegedly told NotNice that Ja Frass was not loyal and would jump ship once he found a hit song. However, a big revelation from the “Crime Lord” vocalist to Notnice disclosed that Poppy had attempted to have him join Unruly, by providing him with a contract.

Ja Frass declined Poppy’s demands and was subsequently booted from the circle. The incident seemed to confirm the deception NotNice had noticed.

Another young talent that got caught up in the thick of things is Unruly signee Quada, who allegedly sought refuge in NotNice following Popcaan’s lackadaisical approach to his career. The not so nice producer decided to help Quada by allowing him to voice one of his biggest songs, “Celebration.” The track was initially a solo effort, however, NotNice recruited his artiste Jah Vinci to lend his vocals to give the track a boost. This did not sit well with the Unruly leader, who initially prohibited its release. The lyric video for “Celebration” was eventually released to Quada’s Youtube account on October 05, 2018.

Quada pledged his loyalty to the Unruly camp and, in a quite respectful manner, relinquished any claims that he said anything ill about Popcaan. According to the “Hail” deejay, there will always be some kinks to iron out, but he has never seen any need to badmouth his label boss, especially since Popcaan has paved the way for the growth of his career.

It seems Quada has taken a line out of Govana’s recently released list of advice, in which he says, “HOLD YOUR OWN ..If yuh got help.. NEVER diss who help yuh.. BUILD UR THING.. nuh try ride nuh man wave.”