YG is helping spread conspiracies that 5G is responsible for the coronavirus pandemic.

It turns out that Keri Hilson isn’t the only celebrity who believes that 5G is why COVID-19 is crippling the entire world, now YG is spreading the same conspiracy. Four months into the Coronavirus pandemic, people are starting to suspect that this virus may not be all it’s claimed to be. According to official reports, COVID-19 originated in the Chinese city of Wuhan, where the first cases of the deadly disease were discovered.

This particular strain of the coronavirus is believed to have been transmitted from a bat to a human, likely due to the purchasing and consumption of the creature from a live animal market, which is common in the country. Yet, not everyone believes that that is the real story. As the virus gets worse, many conspiracy theories have been born, with the most popular one being related to 5G.

The technology is the fifth generation of wireless communication used by cellphones and other networks, with the theory alleging that it is actually the effects of the radiation that are making people sick and that governments are using the 5G signals to control them. 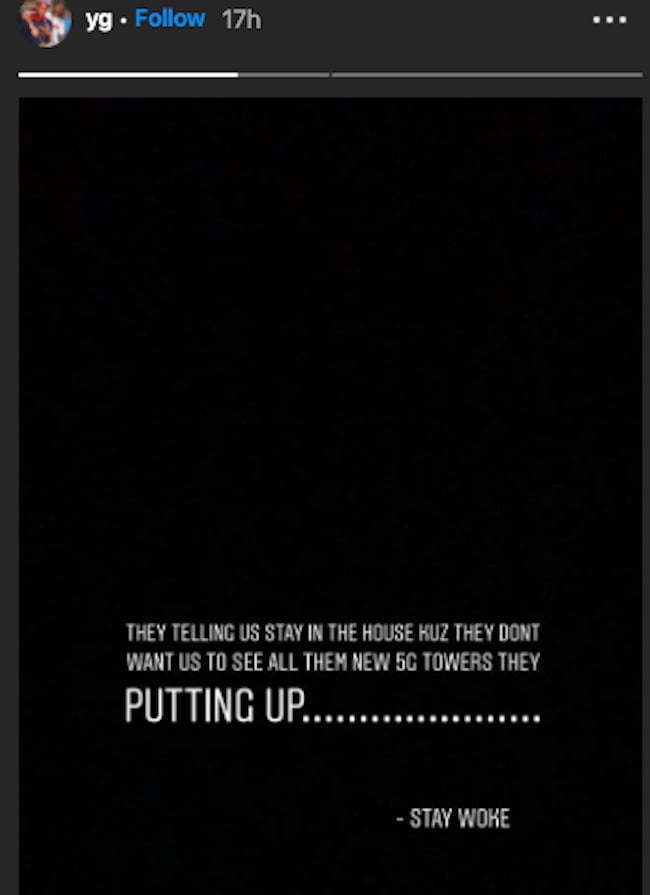 As crazy as it sounds, YG has now jumped on the suspicion bandwagon. “They telling us stay in the house kuz they don’t want us to see all them new 5G towers they putting up,” he wrote on his IG Story. The “Go Loko” rapper is not the only celebrity to think there is some truth to this conspiracy. Keri Hilson recently waxed lyrical on her Twitter, telling her followers to turn off their LTE to disable 5G.

5G or not, COVID-19 has already infected over a million people worldwide, with more than 65,000 dead.