Keri Hilson thinks 5G is the reason for the Coronavirus.

No one knows precisely what created the Coronavirus, but Keri Hilson has a theory. According to experts, the virus, which first began in the Chinese city of Wuhan in the Hubei province, has its origin in the animal kingdom. Wuhan is known for its large wildlife market where dogs, bats, wolves, and pangolins are all sold as food. There are some theories that cross-contact between a bat and a human cause COVID-19 as the virus is present in the flying mammals. With the infection rate now spreading throughout the world like wildfire, many more theories about the disease’s origins have come to light.

Keri Hilson was one to share her views, and the idea is even scarier than spillover contamination gone mad. The “Pretty Girl Rock” singer believes that the technology we use on our cellphones is the cause of the current pandemic, which has over 150,000 cases worldwide. “People have been trying to warn us about 5G for YEARS. Petitions, organisations, studies… what we’re going thru is the affects of radiation,” she told her 4.2 million Twitter followers. “5G launched in CHINA. Nov 1, 2019. People dropped dead. See attached & go to my IG stories for more. TURN OFF 5G by disabling LTE!!!” 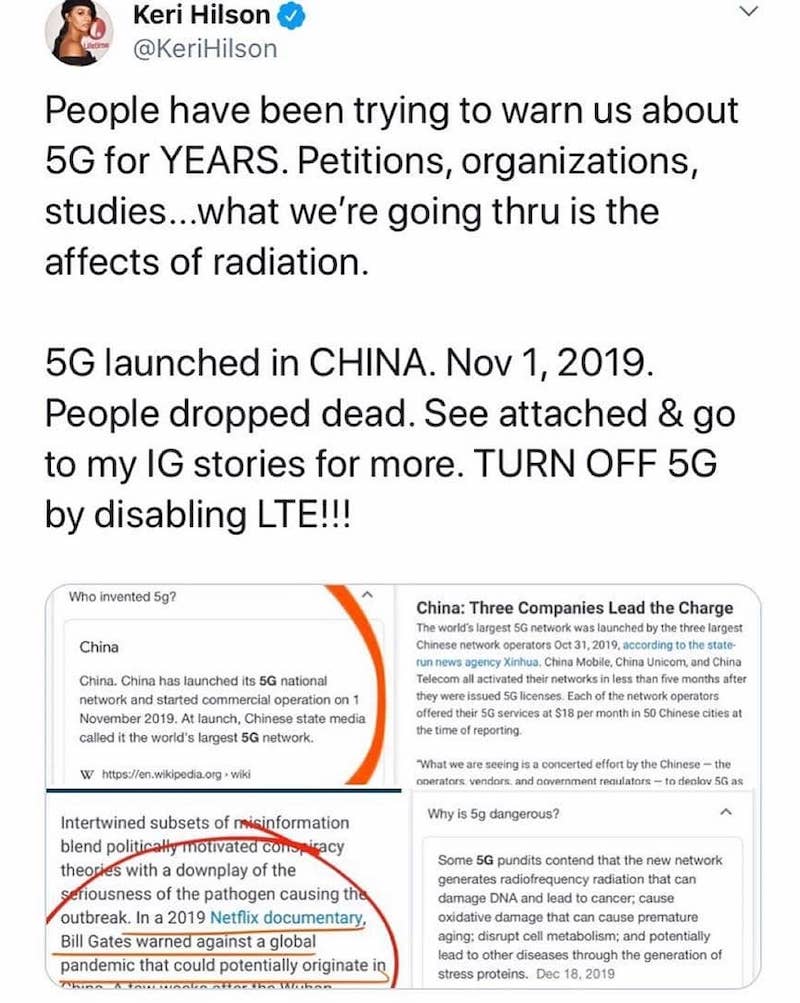 Keri Hilson elaborated that the disease, which has predominantly affected Europe, is not that prevalent in Africa as the continent does not operate on 5G. As a bit of advice to her fans, she recommends turning off you phone at nights when your sleeping and putting them on airplane mode. She also wants you to keep your phones away from your bodies as much as possible.

Not everyone was impressed with Keti’s insights, however. Some Twitter users called her “deeply irresponsible” for posting such allegations considering she has such a large following on the social media network, while others suggested that one of her followers may be a scientist who can enlighten how about why her thoughts are “completely and utterly wrong.”

In Keri’s defense, she did say she was not an expert and is entitled to her opinion. Do you think she may be on to something?

She has since deleted her tweets.

You apparently have millions of followers.

Perhaps one of them is an actual scientist who would love to explain all this to you and why this is completely and utterly wrong.

with the following you have, tweeting this is deeply irresponsible. shame on you.

Lmaoo Yo Keri Hilson really tried to say corona virus is linked to 5G. That was the dumbest shit I heard since the pandemic started. pic.twitter.com/8lBQsEeTGN

Wait, Keri Hilson believes 5G is the reason #COVID19 is spreading and NOT dirty ass people not washing they hands!? pic.twitter.com/0JIzCZHfkG